From Weezerpedia
(Redirected from Summer Songs 2000)
Jump to: navigation, search

The Summer Songs of 2000 (also known as SS2K) are a group of songs that were demoed in 2000 and performed live by Weezer on their comeback Summer tour that year. It is also the de facto name of an "album" created and leaked by Rivers Cuomo on the internet with altered versions of the songs in 2001. 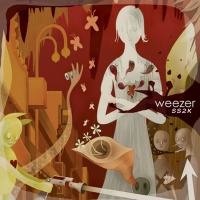 A popular fan-created cover for the SS2K album, based on the winner entry by artist Heisuke Kitazawa for a Maladroit cover contest

After a flurry of solo demos in late 1999 and early 2000, Cuomo reconvened Weezer in order to lay down some recordings and prepare for an upcoming tour. The band, (then consisting of Cuomo, Mikey Welsh, Pat Wilson, and Brian Bell), were made an offer to join that year's Vans Warped Tour, a popular annual punk and alt rock festival. This exposure led to a series of dates on their own as well. Weezer's setlists during the tour typically consisted of classics from The Blue Album, Pinkerton, a couple of B-sides, and a rotation of as many as four of fourteen new songs. Many fans assumed that these songs would be recorded for a third Weezer album, and shortly thereafter, when referencing the songs, labeled them the "Summer Songs of 2000" (commonly abbreviated as SS2K).

Beginning in april of 2000, various DA-88 recordings were made by the band, for purposes of self-review. They were multitracked with some overdubs added (i.e. extra guitar and vocals).

Recorded live with a mobile unit during soundchecks and sometimes the shows themselves. These demos were compiled from hundreds of hours of recordings. Most of the post-warped tour US shows in summer/fall 2000 were fully recorded on the mobile 8 track unit, including the soundchecks, which is when the new songs were demoed.

When only "Hash Pipe" made the cut for The Green Album, fans of the songs started a petition demanding the release of studio versions.

Pleasantly surprised, and in response to the fan involvement, Rivers personally created an "official" ten-song album track listing that featured trimmed and rearranged versions of the SS2K songs. The alterations were accomplished with digital editing. Having been over a year since the songs were recorded, Rivers felt that he was able to determine better song structures, and wanted the definitive versions to be released. The source material for this project were demos and live recordings done in the summer of 2000. On November 11, 2001, the songs were given to the fan site www.summersongs2k.com for distribution.

To date, three of these songs have appeared on Weezer albums - "Hash Pipe", "Dope Nose" and "Slob". "My Brain" was released on Rivers' second Alone album as "My Brain Is Working Overtime". However, other SS2K songs such as "Mad Kow", "Superstar", and "Modern Dukes" were later demoed in 2002 during the Album 5 Demos, though again did not appear on an album release.