From Weezerpedia
(Redirected from Pat)
Jump to: navigation, search

Patrick George Wilson (born February 1, 1969 in Buffalo, New York) is an American musician, best known as the drummer for the alt-rock band Weezer. He joined the band in 1992. He, along with Rivers Cuomo, remain one of the two founding members to have continued playing with the band. In addition to his work in Weezer, he also fronts his own band The Special Goodness.

Patrick Wilson was born in Buffalo, New York on February 1, 1969, but raised in nearby Clarence, New York. He was introduced to music very early on in his life, making his first musical purchase of Barry Manilow's 1976 album This One's For You. Shortly after his fifteenth birthday he went to his first concert, seeing Van Halen. As a result, he was inspired to start taking drum lessons with friend Greg Czarnecki. By his senior year at Clarence High School, Pat and Greg began teaching the instrument, eventually amassing over thirty students. 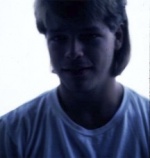 Pat in his teens

After graduating high school in 1987, Wilson attended a local community college briefly, dropping out after one semester. He commented, "College is such bunk. Too much politics and jockeying for favor. I just couldn't do it. College is great if you want to learn, but that's not what college is about, it's about making your professor happy and getting good grades and getting into an IBM. Any place that says that they're only accepting college graduates is not a place I'm very interested in being."

At age twenty-one, Wilson grew tired of the local music scene, and at the urge of friend Patrick Finn, moved to Los Angeles. Shortly after arriving in LA, he joined the short-lived band Bush (not to be confused with Gavin Rossdale's Bush). While in Bush, Wilson met future Weezer bass player Matt Sharp, with whom he developed a friendship. Eventually, by the spring of 1991, Wilson started a band with Finn, Sharp, and later, Jason Cropper, called The Wrong Sausage.

Meanwhile, Wilson was also in another band with future Weezer frontman Rivers Cuomo called Fuzz, which dissolved within three months. "By that time I had met Matt Sharp, and we were trying to figure out something to do. We had a lot of passion and interested in certain kinds of music, but we didn't know how that was going to translate into what we were going to do. So we met Rivers - 'He's got an 8-track, let's get with him' - and we convinced him to move into this apartment with us. Rivers was just starting to write songs and he asked me to play drums on a song for him. That turned into a band called Fuzz, with this girl bass player. That was pretty cool, but it had to die."

In the summer of 1991, Sharp moved north to Berkeley to pursue what Karl Koch called, "some sorta symphonic keyboard sequencing music." Other members of the band moved to separate apartments during this time. During this time, Wilson performed in a number of different bands such as The Dum Dums and United Dirt. Matt Sharp would later replace Finn. During this time Wilson and Cuomo embarked on the "50 song project" in which they would dedicate themselves to writing 50 new songs. Out of this project, future Weezer songs would be created such as "Undone - The Sweater Song," "My Name Is Jonas," "Lullaby For Wayne," and "The World Has Turned and Left Me Here."

In January of 1992, Sharp reconnected with his former bandmates Cuomo, Wilson and Cropper, and Wilson showed him material from his and Cuomo's "50 song project." Sharp was pleased with the material and returned to Los Angeles to join the band, now consisting of Cuomo, Wilson, Cropper, and Sharp. The band had its first true rehearsal February 14th, and would eventually adopt the name Weezer.

In addition to his drum duties, Wilson has three co-writing credits on Weezer songs "The World has Turned and Left Me Here," "Surf Wax America," "My Name is Jonas," and wrote "Automatic" himself. However, Rivers Cuomo and Pat Wilson have written several more songs collaboratively including Lemonade (released on Alone: The Home Recordings of Rivers Cuomo) and Lullabye For Wayne (Released on The Blue Album Deluxe).

In the past, Wilson's amusing stunts on skateboards, scooters, and bicycles have been video taped and released on Weezer's official website. Some of these videos can be seen on Weezer's DVD, Video Capture Device, released in 2004. Wilson can be seen playing guitar for Weezer when they play acoustic versions of songs on tour, usually at radio station visits. During the Foozer tour, Wilson played lead guitar on and sang "Photograph".

Wilson and Rivers Cuomo are the only founding members of Weezer that have remained in the band.

Wilson wrote and performed lead vocals/guitars on "Automatic", a song he originally intended for The Special Goodness, on Weezer's third self-titled album. The track was remixed by LA Riots for the video game Gran Turismo 5 Prologue.

Wilson contributed the song "In the Mall" to 2009's Raditude, though Cuomo sang lead vocals.

In June of 2014, a video of Wilson went viral. During a performance of "Beverly Hills," in St. Augustine, Florida a fan threw a frisbee on stage. Wilson caught the frisbee without breaking rhythm with the song.

Since 1996, Wilson has recorded and performed with his own band, The Special Goodness, for which he writes songs, sings lead vocals, and plays the majority of the instruments. Originally little more than a solo project, it has evolved into a full-fledged band. The unit has released several albums, and Wilson himself has made songs available on his website in the past. Currently, Atom Willard, formerly of Rocket From The Crypt and Angels & Airwaves, plays drums for The Special Goodness.

In between various 1995 Weezer sessions for Pinkerton, Wilson made a series of recordings under the guise of Huge Guy. These recordings were essentially an embryonic version of The Special Goodness, and featured early versions of many songs from that project's first album.

Almost immediately after Weezer's initial success, and as a favor to bandmate Sharp, Wilson played drums on The Rentals' first record Return of the Rentals but did not tour with the band, and has had no further involvement.

In 1998, Wilson played drums on the Homie track "American Girls" on the Meet the Deedles Soundtrack. Curiously, only a small portion of his drumming was used, and was looped on the track.

In the early 2000s, Wilson tinkered with electronic recordings under the moniker Franklin Mint. Several of these recordings were released on the web, and a Franklin Mint version of the Weezer song "Keep Fishin'" was released as a B-side to the US CD single for that song in 2002.

Around 2003, Wilson became re-involved in a long-forgotten project with Karl Koch called Southern Fried Swing, releasing one album, Free Flight Thru the Universe of Sound.

Wilson married to Jennifer Wilson in 1994 and they had two sons, Charlie, born in 2004, and Ian Patrick, born in early 2008. Jennifer passed away following a battle with cancer in August 2013. Patrick remarried in February 2015. He also participated in episode 82 of MacBreak Weekly, Leo Laporte's Weekly Mac Podcast.

With The Special Goodness