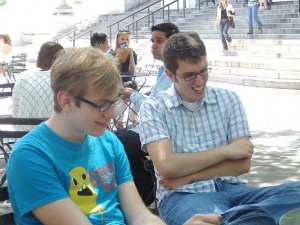 The Gecaj and Giggens Power Show is a radio show that broadcasts live from WSIN Radio 1590am on the campus of Southern Connecticut State University in New Haven, CT. Hosted by Albumsix.com users, Gecaj and Giggens, the show is known in the Weezer community as having played Rivers Cuomo's Alone II album in its entirety before it was officially released. The Power Show has also done a 24 hour show, in which musicians from the Albumsix message boards were interviewed and two of their songs were played on air. In November 2009, The Power Show interviewed www.weezer.com's Karl Koch. The Power Show ended with episode 100 on December 16, 2009.

In the spring of 2005, Gecaj and Giggens both knew they were to attend SCSU in the fall. They also both knew they wanted to have their own radio show, and play their favorite band of all time, Weezer. At the fall semester orientation, Giggens found the WSIN table, and signed himself and Gecaj up to become DJs. At the first radio station meeting, members were told to come up with a name for their radio shows, and both Gecaj and Giggens agreed that their names needed to be in the show's name. On this historic occasion, Gecaj suggested The Power Show, as mere filler until a real name could be thought of, but the name stuck.

Early episodes of the Power Show struck a chord with fellow station members and many high school students would often skip class to listen to the Power Show. Due to the alternative and indie music they played, a lot of people began to hang out with them on the air, and the first Power Show family was born. On these early shows, sing-a-longs would happen, Giggens would wear ties, and Gecaj's love of wrestling found its way into on-air conversations. The Power Show helped out at the station's third ever SINFEST concert on the school's campus, and keeping with their love for Weezer, had an all Weezer show before seeing them in concert one day in October 2005. Giggens called in live from the concert during a friend's radio show to give an update as to what had been played so far (these were the days before twitter). The Power Show emailed Weezer to see if an interview could happen, but alas, it didn't.

For the next couple of years, The Power Show had many ups and downs. The show went on hiatus when work and class schedules conflicted with each other in 2007, resulting in Giggens' first solo show called Tune In, Drop Out, With Giggens, a 1960's garage rock show. When The Power Show returned in the fall of 2007, their on-air family had changed, they had more listeners than ever, and the rule "If we have over 20 listeners, our shirts will come off" started.

On November 18, 2008, The Power Show broke their personal record and station record for amount of listeners due to the fact that they played all of Rivers Cuomo's Alone II album before its official release. They had received the mail while on-air, and opened one piece to discover Alone II. Upon seeing this, Giggens logged onto Albumsix.com, where he informed members that The Power Show was going to play the entire album immediately. The thread he started quickly massed over 60 pages worth of commentary and won an Albumsix award at the end of the year for being one of the most popular threads.

On November 4, 2009, The Power Show interviewed www.weezer.com's webmaster Karl Koch. Questions were asked regarding the upcoming "Rarities" CD, aswell as "Pinkerton Deluxe". They also talked about Karl's project, Karlophone, in which Karl said he would like to perform live someday, but didn't know if it was possible.

The Gecaj and Giggens Power Show ended its four year run at WSIN 1590am with episode 100 on December 16, 2009. The three hour special saw Gecaj and Giggens playing songs usually played during Season One of the show, as well as new classics like Steel Panther's "Death To All But Metal". As the show came to a close, Gecaj read off a list of names he wished to thank for help over the years, and Giggens gave a small speech. The final song ever played on The Power Show was "Only In Dreams" by Weezer. After the song finished, the duo came back on the air and said one more final goodbye.