"Visions of Anna" is the third track from the EP Puckett's Versus the Country Boy by Matt Sharp.

"Visions of Anna" was originally debuted during acoustic sets at Rentals shows in Japan [1] in 1999. The song was later repurposed for Matt Sharp's solo projects. 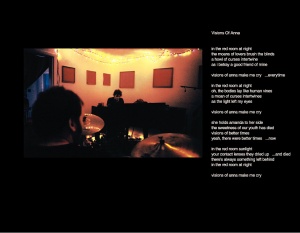 Lyric sheet made by Bryan Bos, with photographs by Sharp

She holds Amanda to her side
The sweetness of our youth has died
Visions of better times
Yeah, the better times