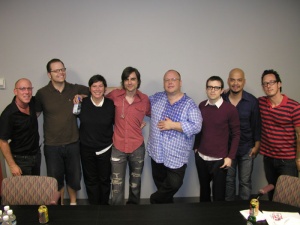 Weezer and The Pixies backstage in Montreal

On July 10, 2005 Weezer performed in Montreal, QC, Canada, at the Stade Uniprix on their tour in support of Make Believe. This was the last of 3 co-headlining shows with The Pixies. The opening band was The Fray.

...MB '05 Tour: Day 48: Montreal, Canada - Stade Uniprix
Montreal is a very cool city that it seems we've rarely been able to enjoy until today, a beautiful summer day. I recall snow, sleet, freezing temperatures and most importantly a lack of time to check anything out in the past, but this time there was a little more time, and soem famous Montreal bagels and smoked meat sandwiches were investigated.

This was the 3rd of the 3 in a row with the Fray and The Pixies, and the last co-headliner with the Pixies, so it was decided to make sure that we made time for a formal meeting of the 2 bands, right between their respective sets (not everyone had had the chance to meet everyone else with the hectic scheduling), and of course, take the historic group photo you see here. So much has come full circle with this day, with the spirtual fathers (er, uncles? theyre only a little bit older!) of Weezer finally being in handshake range. The mutual admiration was heavy in the air, and spirits were high. Dave Lovering even busted out one of his deep array of magic tricks for the weezer men, pulling off some sweet rubber band chicanery.

The Pixies said they felt the crowd was sort of opposite the Toronto crowd - a bit more weez-centric and not as stoked for the Pixies. But I saw some pretty stoked people during the Pixies set, so maybe its just the 'opening act' thing - even if youre co-headlining, whoevers on first seems to get the more relaxed reception.

For some reason, attendance was lower than expected tonight, though those that did attend were having a great time. Montreal is traditionally a great town for weezer and the Pixies are very hightly regarded there, so the 2 bands together seems like a no-brainer. Some theorize that because the Stade Uniprix has never been used as a venue before (aside from the previous night's Black Eyed Peas show), people were hesitant to check it out. In any event, it was a great show overall, and those who didnt come, really missed out!

I just want to tell you that you did a good show tonight in montreal but i think you did too much "ballads". Sorry but i was really deceive because you did only 1 song from Pinkerton, your best album by the way. I saw you last time (back in 2002 i think) at the molson center and it was way better than tonight. I wanted to hear songs like tired of sex, no one else, dont let go, take control...Maybe next time !!! At least i discover an old band called The pixies they we're awesome tonight!!! See you next time ---Will W.

I just wanted to say how great the show was in Montreal tonight. Me and my friends had been waiting ten hours in line (since 9 am) and were very excited. We were quite sadened when we saw you and were yelling for you, but we know you couldn't come through the fence so its all good. The intro for Buddy Holly was awesome I remember hearing it on a bootleged weezer concert but never thought i would hear it live. Also the extended solo for Beverly Hills was really cool. It was too bad that there was no Giant "=W=" but its alright because I wasn't really expecting it. Anyways just trying to show my support. Email me back about anything, althought I doubt you will need too. ---Steve M., Weezer Jonas Member