Jason Cropper premiered the song to fans by performing part of it on April 14, 2020 during a video stream on the platform Zoom hosted by Rivers Cuomo. In a Q&A on the r/weezer Reddit community, Cropper confirmed that the song "Goodness Knows" would be released "on or around June 12th". On May 21, Cropper first performed the song in full during a stream of The Golden Hour for his Facebook and Instagram followers.

Cropper released a teaser for Goodness Knows on June 30[1] and a release party was held on July 3, during which he performed new material. The song was released as Cropper's first single on July 13.

During a live performance with The Jason Cropper Band in 2021, Cropper explained the inspiration for Goodness Knows[citation needed]: 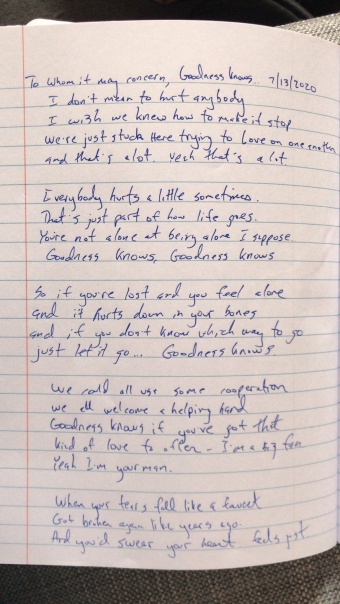 Well, I don't mean to hurt anybody
I wish we knew how to make it stop
We're just stuck here trying to love on one another
And that's a lot
Yeah, that's a lot

Everybody hurts a little sometimes
That's just part of how life goes
You're not alone at being alone
Well, I suppose, goodness knows
Goodness knows

So if you're lost and you feel alone
And it hurts down in your bones
And if you don't know which way to go
Just let it go, 'cause goodness knows

We could all use some cooperation
We all welcome a helping hand
Goodness knows, if you've got that kind of love to offer
I'm a big fan
Yeah, I'm your man

When your tears fall like a faucet
Got broken again, like years ago
And you swear your heart feels just like a supernova 'bout to implode
Let it go, 'cause goodness knows

So if you're lost and you feel alone
And it hurts down in your bones
If you don't know which way to go
Just let it go, 'cause goodness knows

Well, I don't mean to hurt anybody
I'm just here to sing this song
And if you feel the way that I do, you could join in
And sing along; it won't take long