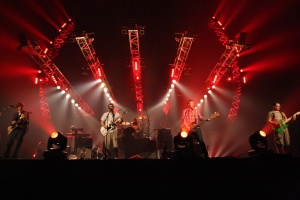 ...Here's the roundup of whats up in weezerworld these days...

There are more shows for 2012 to be announced, stay tuned... 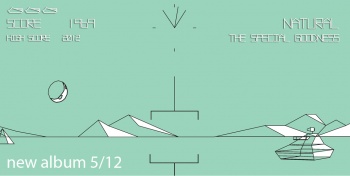 ...Patrick Wilson has completed a new The Special Goodness album, his first since 2003's "Land Air Sea". Its titled "Natural" and features all new recordings made at his SoCal home studio (though you may recognize some of the songs from older versions from years ago). "Natural" is coming out this coming Saturday, May 12 (correction) May 22! Hear a preview stream here, and like the TSG Facebook page here. The album will be available on Amazon mp3 here. Also the album is streaming on Spotify. Check it out and enjoy!

...Scott Shriner has been working on his first ever solo release, as 'Shriners', and is releasing a debut EP entitled "Shiners" soon. One song from the EP, "Pretty (Watch the Shadow)", is available on a limited edition multi-artist picturedisc 7" single, available for preorder here. And Scott will be performing several songs from his upcoming release at a Book/Soundtrack release party in 5/11 at The Last Bookstore in Downtown LA - details here.

...recently the Rock And Roll Hall Of Fame asked Jordan V., a photographer who shot the last photos of Mikey Welsh before he passed away, for a photo to honor Mikey at the Rock Hall. Originally The Hall wanted to feature this photo in their annual memorial roll call during the Induction Ceremony, but the sudden and untimely loss of the Beastie Boys' Adam Yauch apparently created a time crunch (to which I say that's really a shame and didn't have to be that way - how about a few less shots of that random singer and a few more of the memorial pix?). Anyway, the Hall says they will honor Mikey by using the photo somewhere in the museum, perhaps there is a memorial section?

UPDATE: Scott Heisel of AP mag writes this good news: "Just wanted to let you know that I was actually at this year's Rock Hall Induction Ceremony in Cleveland, and Mikey's slide was shown as a part of the montage to the live audience. (I didn't see the HBO broadcast, however.) A number of us applauded when he appeared. I was thrilled they acknowledged him, after the Grammys snubbed him earlier this year."

Anyway, heres Jordan's photo, as prepared for the broadcast: 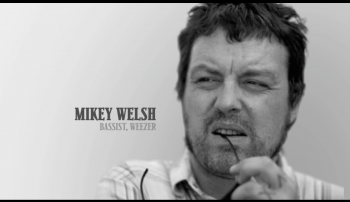 Heres a great acapella cover of "Haunt You Every Day":

also: congratulations on his engagement - and it all started on the Weezer Cruise!

And finally, you NEED to watch the Weezer guested "Hard Times With RJ Berger" episode, overdubbed in German for German TV. (skip ahead to about 16 minutes for the weezer men sprechender Deutscher. http://www.myspass.de/myspass/shows/tvshows/hard-times/You-Me-And-W...

...6 degrees of separation: from the Beatles To Weezer