today I went over to Rod's studio to look at his live film footage of the band, shot on the recent Enlightenment Tour. It looked really cool, and we're hoping to edit together some of this recent live stuff to be added to the dvd project. Rod also showed me some really cool stuff he shot this past June in the studio with weezer, just really great looking stuff of the guys at work. We're gonna have to get some more of this kind of stuff later this fall when the guys return to the studio! 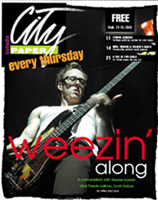 ...today an interview with Scott Shriner was published in the [Sept. 12th issue] of the Toledo City Paper, as the cover story. The story is archived online at the toledocitypaper.com.