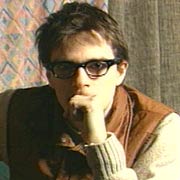 Weezer's Rivers Cuomo
Photo: Interscope
When Weezer said they wanted to get back into the studio as soon as possible after the release of their new album, they weren't kidding.

"A local D.C. studio was booked, and the session lasted from 2 p.m. [until] about midnight," Koch wrote. "The guys worked at an extremely fast pace, but not due to rushing. They had practiced these songs a lot in the last few weeks during soundcheck and had even played some of them live."

Weezer bassist Mikey Welsh recently said he didn't expect the group to play its newest songs live, citing fears of Napster (see "Weezer Drought Turns Into A Flood"). Unbowed, the band played five of the demoed songs at a show in St. Louis, according to Koch, who tours with the group.

The other songs Weezer recorded Sunday were "Listen Up," "American Gigolo," "High Up Above," "December," "I Can't Tell You," "Happy Grunge" and the questionably spelled "Puerto Vayarta." Koch cautioned that all titles are tentative. Welsh said earlier this month that Weezer want to begin putting at least an album a year.

A spokesperson for Weezer's label, Interscope, said that Koch's postings are a reliable source of information but that the label was unable to confirm the band's demo session.