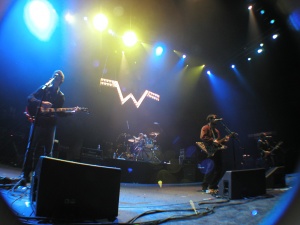 On March 15, 2002 Weezer performed in San Sebastian, Spain at the Plaza del Toros de Illumbre on their Europe Tour preceding the release of Maladroit. The line-up also included The Cranberries, Lombardi and Dover.

#3 of 3 festival style shows here in Spain with Lombardi, Dover, and The Cranberries, this one in the very cool looking town of San Sebastian, near the northern coast of Spain. Todays venue, the Plaza del Toros de Illumbre, is a bullfighting ring, make no mistake about it, right down to the dusty earth in the ring, where the fans stand. Freaky trophied bull's heads contrasted sharply with a set of childrens amusement rides in the lower lobby.

Tonights show was a bit of a comedy of errors for the weez, though nothing drastic. First a missed guitar switch had a cacophanous "Superstar" going with 2 different guitar tunings clashing. They started over with the proper guitar, Rivers announcing "ok now THIS song is called Superstar". Later, during a tradition-busting live rendition of a cover song, the Turtles' "Happy Together", a few cues were missed and the structure of the song was sort of re-tooled in mid performance. Chalk that up to the guys not quite having a perfect handle on the song yet. (I still thought it sounded rad!) Then finally there was some confusion late in the set, as the setlist was accidentally printed with the wrong closing track (They really finished with "Hash Pipe", not "Buddy Holly"). To top it off even I ran into some glitches, with my main videocamera running out of tape halfway through the set and me forgetting to swap the tape for a fresh one. Good Greif! Well, you can't win 'em all! As Pat Wilson later said, "the show was ass-like". Anyway the crowd (well the part of the crowd who seemed to know who weezer were, anyway) were stoked, and thats what counts.

It was a cool little set of big shows in Spain, and thanks go out to Lombardi, Dover and The Cranberries, all of whom rocked the place down to the ground all 3 nights. It was an honor and a pleasure.