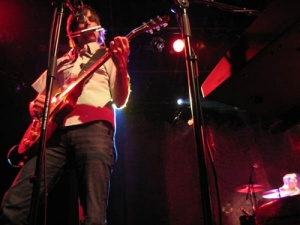 Weezer kicked off their tour in support of Make Believe on April 26, 2005 in Vancouver, BC in Canada at the Commodore Ballroom. The opening act was Ringside.

...the crowd is going bananas as I write this backstage. more later!

Guitar tech Bobby (sporting short hair now) joined the band onstage playing guitar parts when Brian switched over to keyboards. Brian has 2 keyboard setups flanking his microphone and pedal boards now (yes, 'boardS' as in 2 - hes got even more pedals going on than before!), a Kurzweil piano type sampling keyboard, and a Moog Voyager, the awesome new analog synth by the master himself, Bob Moog. Listeners are now hearing synth+piano parts from all eras played on keys instead of substituted on guitar (the sound in 'Buddy Holly', the lines in 'Tired of Sex' etc), and getting the fuller flavor and textures of the new Make Believe stuff delivered. It makes for a somewhat more complicated stage set up, but its worth it in the sonic range now available to the band in a live setting.

Robert Patrick of T2 fame, apparently in Vancouver shooting a film with Harrison Ford, was spotted backstage praising weezer and expressing his love of the show!

I had the pleasure of finally meeting (in person) Ridd, longtime online weez supporter and message board moderator. Word!

The band was stoked and relieved to have gotten to this point. Post show, there were a lot of smiles backstage. While they tend to focus on little mistakes and what to improve next time, they definitely had a good time on stage and are pleased to be rocking out again.

Opening act Ringside was polished, tight, and quite good. Their sound is an interesting blend of softer textures (including a classic Wurlitzer) and more modern sounding styles. They had a lot to offer and everyone is happy they are on board. The Vancouver crowd was very supportive. Check 'em out!

What else to say but...well there is nothing to say, it was just too amazing ! An excellent way to start off of the first tour in 3 years. It was soo intense! They were right on for not playing for that many years. Highlights of the night, definetely have to be the new songs. Peace was just soo pure, there is nothing better then to hear it live before the album even comes out. The intensity of the band was so good, just watching brian played the keyboard in 'Haunt You Everyday' ..killed me. Everyone was just so....ON! Old hits such as 'Getchoo' just set the night off. Nothin better with mixing the new with the old. 'The Good Life' was such a good way to come back out. Funny how me along with a hundred other people stood their waiting for a second encore, I guess we were juuust being spoiled to ask for more!! Once again, excellenttttt show, and I cant wait til you all come back." =W=EBB