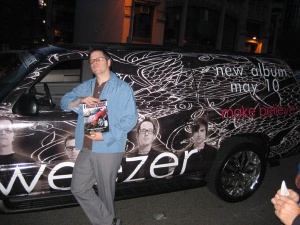 Patrick Wilson right before the show in Seattle

On April 27, 2005 Weezer performed in Seattle, WA at the Moore Theatre on their tour in support of Make Believe. The opening Act was Ringside.

...In my opinion, the band was tighter and more solid this show. Opening night jitters may be wearing off a bit. The Moore Theater really crams the people in, its very intimate for a theater, and the people were pretty nutzo as predicted...

Bobby (guitar tech+back-up guitar on several songs) was heard to comment mid-show that this was one of the best shows he's heard, and Bobby had heard a hell of a lot of shows in his day!

Right before the show, when we were bringing Pat in to warm up his drumstick hands, a blinged out "Make Believe-mobile" drove up from out of nowhere in front of the Moore Theatre! There was no time for questions! We had time for a few quick photos and it was in to do the show.