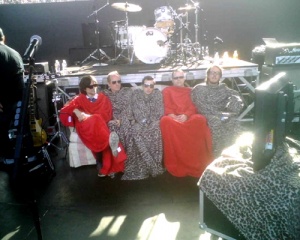 Weezer at the KROQ Weenie Roast

On May 16, 2009 Weezer performed at the KROQ Weenie Roast Y Fiesta in Irvine, CA. This concert is sometimes refered to as "The Fail Show." It was at this concert that Weezer debuted their "Wuggies," customized Snuggies with Weezer written on them. This show was also broadcast live online for free by www.KROQ.com. Video footage of this show was used for the video of the "Kids/Poker Face" cover that was posted on Weezer's YouTube account on July 12, 2009. The audio, excluding lead singer Rivers Cuomo's introduction, was recorded in the studio during the Raditude sessions and eventually released as an iTunes pre-order bonus track. Weezer was initially scheduled to play the show's final spot, but the plan was changed somewhat last minute and Weezer was moved to the middle of the lineup.

Note: Karl Koch previewed the show with a post, but didn't provide a post-show recap.

....Folks, heres the new scoop - Weezer is headlining the KROQ Weenie Roast on May 16th, at Irvine Meadows in Irvine, CA! If you are or will be in SoCal at that time, clear your calendar and come on down to catch the first Weezer show since last fall! Of course Weenie Roasts feature a big list of bands (including Kings Of Leon, Jimmy Eat World...Silversun Pickups... Rancid... to name a few!) so theres plenty to take in... But particularly the Weez of course! Check Kroq.com for more details, as tickets will be going onsale May 7th only at livenation.com! 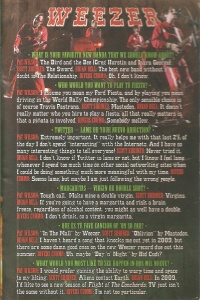 Booklet from the show featuring an interview with the band.

This show received particularly negative reviews from fans on Albumsix.com. The band posted several updates to their twitter that built up sizable hopes for the show, calling the plans for the show "epic." Fans predicted announcements of Weezer's then-upcoming seventh album, a preview of some kind of their tour with blink-182, the live performance of new songs, and much more. KROQ was streaming the concert online, and this gave all these anxious fans a front row seat for the "epic" plans. The plans ended up being the debut of the "Wuggie," which infuriated many Albumsix members. Some of these fans expressed their disappointment by nicknaming this concert "The Fail Show." It's set list has been referred to as a "Six Hits set list."