From Weezerpedia
(Redirected from Jaime)
Jump to: navigation, search

"Jamie" is the fourth track on the deluxe version of The Blue Album and a b-side to Buddy Holly.

Jamie was written by Rivers Cuomo early in March 1993 as a sincere reaction to the help the band was getting from their first attorney, Jamie Young. Although band lawyers are indeed paid very well, Rivers was experiencing a real feeling of gratitude and safety, which comes out in this track. It wasn't so much a "thank you" as it was an expression of the feelings of confidence and security produced by having a high-powered attorney (after long months of worry).

Though he had already left the band, Jason Cropper is featured on "Jamie," the first and only proper Weezer release he would be featured on, not counting the bonus tracks on the reissue of The Blue Album.

The band subsequently had a fortunate run in with one Dale Johnson, then a student at Layola Marymount, who was taking a class in music recording and sound engineering. Dale had a class recording project coming up, so a plan was hatched to get the band to record with Dale for his project. The song was recorded live on April 15, 1993 with no overdubs. The track was later delegated to the DGC Rarities, Vol. 1 album, a move which took convincing from A&R man Todd Sullivan; they were concerned that their "rarity" might not be up to snuff sonically. Todd reminded them that the feel was amazing, and the world had to hear this recording. Dale Johnson recalls: "I guess the guys were happy with the LMU version of 'Jamie,' but I never entirely was completely satisfied. I mean, there's only so much you can do with a live take and only a few hours! Rivers seemed to be really amazed when I told him I only got a B+ on the project. 'But it's gonna be on a CD, man...!' I remember Matt being really adamant that they would do the recording project with me, but that they had to own the master. Smart boys, they were, and I agreed to it. I just really wanted to be credited with the recording.

Matt Sharp has also written a song for Jamie, which Rivers helped him record called "Mrs. Young", which later became Please Let That Be You on The Rentals' first album. Jamie is currently an attorney at the law firm of Ziffren, Brittenham, Branca, Fischer, Gilbert-Lurie, Stiffelman, Cook, Johnson, Lande & Wolf LLP in Los Angeles, California.

This is one of the few officially-released recordings featuring Jason Cropper, before being replaced by Brian Bell. The band recorded the song with the intention of it being their first 7" with the b-side including Please Let That Be You. It never fully came to fruition due to the group being signed to Geffen, leaving The Blue Album to be their first-ever release.

The song was re-released on various "Buddy Holly" singles later that year, and again in 1995 as an acoustic radio session on the "Say It Ain't So" single.

There's something wrong with this song, but we can't figure out what it is. It is sweet though, and playing it makes us feel a weird sort of nostalgia for a time in our lives that actually sucked. This recording was done live to 2-track at LMU for this guy Dale's Junior Recording project. He only got a B+, but it still sounds cool. - Rivers Cuomo

Spliced from 2 partially filmed performances. This is what happens when the guitar tech is also the video documentarian. Video techniques in their infancy, to say the least! 1994: Opening for Live in the biggest place Weezer had ever played to date. 1995: Bustin loose in Holland!

-Karl Koch on the live video below for "Jamie," from the liner notes for Video Capture Device 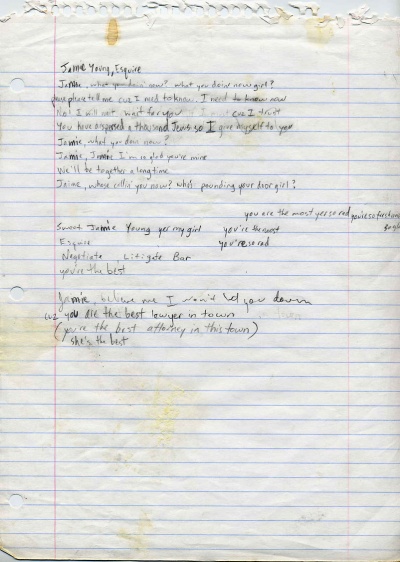 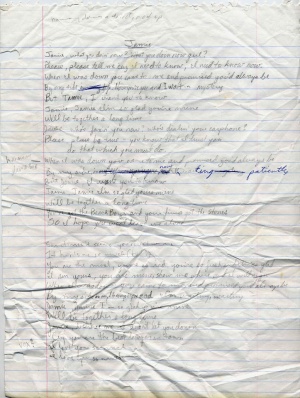 When I was down, You came to me
And promised you'd always be
By my side, now you're gone
And I'm waiting patiently
Jamie, I want you to know

Jamie, Jamie, I'm so glad you're mine
We'll be together a long time

Jamie, who's faxin' you now?
Who's dialin' your car phone?
Please, please be true
You know that I trust you, do that which you must do
When I was down, You came to me
And promised you'd always be
By my side, now you're gone
And I'm waiting patiently
Jamie, I want you to know

You are the most, you're so rad, you're so fresh
And I'm so glad
I am yours, you are mine
Show me where and I will sign
When I was down, You came to me
And promised you'd always be
By my side, now you're gone
And I'm waiting waiting

Jamie, believe me, I won't let you down
Cuz you are the best lawyer in town.

you are the most yer so rad you're so fresh and i'm so glad
Sweet Jamie Young yer my girl
Esquire
Negotiate, Litigate Bar
you're the best

Jamie, believe me I won't let you down
cuz you are the best lawyer in town
(you're the best attorney in this town)
she's the best