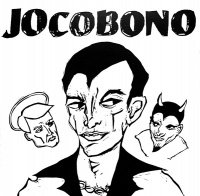 Interviews with bands are designed to get the words straight from the horses’ mouths. In this case, the horses’ mouths were busier emptying cheap beer from cans than answering questions with wit and candor. The interviewer was too busy draining a liter of Jack Daniels to ask any pertinent question. But hey, it was a really swell time talking shit with Jocobono.

Lollipop Magazine: How did three guys from three defunct national bands hook up to form one band?

Mikey: Years ago? Well, we’ve always gone to each others’ gigs: We’ve always talked about jamming together. People were always telling us that we should start a band. In the last year or so, the bands we were in started falling apart... 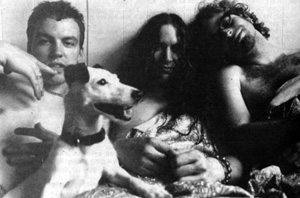 LM: Were you guys friends before your seperate bands got big?

Mikey: I knew Todd when I was in Left Nut, long before Orangutang got big and signed. I’ve known Billy... for a long time.

Todd: After Orangutang broke up, I asked Mikey to play with me and Chris (from Orangutang). Chris wanted it to be more of an indie rock band. So it didn’t work out. I saw Billy at a bar one night, “Hey, let’s get together and rock out. We’ll try to get Mikey.”

Billy: It was weird. Todd and Mikey were talking, and I was talking to Mikey, too. Then the Slower thing came up.

Mikey: I was getting in a real rut with Heretix...

Billy: You had a lot of last shows to do.

Mikey: Yeah, I was booked up with last shows. I was really unhappy with it. I started jamming with Todd and Chris, but Chris wanted to get softer. Playing with me and Todd isn’t... softer. Then Stompbox ditched Erich, and I’ve known those guys for a long time, so I did that.

Todd: And I was jamming with Billy, just the two of us. We went into the studio, asked Mikey to come in, rehearsed a couple of times, and made what is the bulk of this record. Without a band name, without knowing what the deal was going to be, we just went in to record some shit.

Billy: I had some recording time at New Alliance with Mudrock, and we recorded everything except for the overdubs in two days. We didn’t want to do much overdubbing, but we didn’t have any more time, so we set it up with Mudrock that we’d go in after everyone else was done. We’d get a bottle of booze and go in at like midnight and promise to shut everything off when we were done.

Todd: We drank a bottle of vodka, did most of the vocal overdubs, and passed out in the lounge.

LM: Who actually did the recording?

Billy: Everything was all set up, we just went straight to tape. We’d just watched how they’d done it, and then we just watched the needles.

Mikey: Ninety percent of the record was recorded when there was no intention of it being a record, or of us being a band. It was just the three of us having fun, and we had these songs, and we had the time in the studio. We brought Collin Burns from La Gritona, a good friend of ours, in to record vocals on “Camel.” Other people will be on our next record, but we were really in a rush to get out of there.

Billy: Because our studio time was so late-night, a lot of people couldn’t come down.

Todd: My vocal debut is on this album. It’s a true story of begging Jimmy for last call at Foley’s. I’ve haven’t brought it to him, because for years, I’ve walked in and the door will be locked, it’s like 10 after two, and they’ll just kinda whisk me in. If I piss him off, it’ll be 10 ’til two and he’ll be like, get lost.

Billy: I think he can deal with you saying, “Fuckin’ Jimmy.”

LM: How’d you get signed to CherryDisc?

Mikey: We were getting really good feedback from the people at New Alliance, all the bands in the complex. A friend of ours, Eric Jarmon from Smackmelon, had it, loved it, and got it to John Horton from CherryDisc. He really helped us out a lot.

Billy: The best thing about this whole thing was that it just came together. We just didn’t give a shit. We did the stuff, a lot of really cool people were involved, the artwork just kinda came together... We didn’t really analyze it at any point, we just went with it. We had Collin Burns do the cover. We didn’t talk to him about it; Todd just asked him to do it and he did.

Mikey: The fact that we didn’t have a name was funny for us up to a certain point, but then we decided to actually be a band and we had a deal with CherryDisc, then it went from being funny to being really stressful. We had all these people working for us, we had an artwork deadline... We had a list of names, and we were just getting pissed off. We’d decide on something, and then our lawyer would look it up and someone else from California would already be called that. Everyone we knew was helping us try to think of a name.

Todd: We had a deal ready and had an artwork deadline. I needed the cover for some kind of distribution shit, and we still didn’t know the name. I bring him the disc with all the artwork, and he goes, “Hey, that’s not right. Is that your band name?” I’m like, “Yeah, didn’t I tell you? Oh, I forgot to tell you?! It’s JOCOBONO!”