From Weezerpedia
(Redirected from The Rentals concert: 04/05/1996 - Paris, France)
Jump to: navigation, search 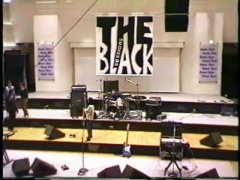 An image from the Rentals' Black Sessions performance, included in the music video for "Please Let That Be You".

The Rentals performed at Studio 105 of Maison de la Radio in Paris, France on April 5, 1996 live on the air for the French radio show C'est Lenoir on the station France Inter, as part of a series of live performances titled the Black Sessions. The performance included most songs from their debut album Return of The Rentals, as well as a cover of the Blur song "Tracy Jacks". Audio from the show has been included in numerous unofficial bootleg releases, including Black Session from the label Loose Dog, The Black Sessions from the label Sangatte Records, and Black Session & Rare Trax from an unknown source.