From Weezerpedia
(Redirected from Tired Of Sex)
Jump to: navigation, search

"Tired of Sex" (originally titled "I'm Tired of Having Sex") is the opening track from Pinkerton.

"Tired of Sex" is one of the most abrasive songs in Weezer's catalog. The song was originally written in either December of 1993 (according to the Catalog O' Riffs) or January of 1994 (According to the Recording History - Page 5). In this song, Weezer lead singer Rivers Cuomo laments his frequent, meaningless, sexual encounters, reciting his list of conquests and wondering why true love eludes him.

"t.o.s. was written almost before rivers was even famous, like fall 94. i remember him playing me a demo of it like xmas 94, it was really slow, and like sad, not agressive. at the time he was fairly monogomous (sp?) with one main girl and perhaps one or two others on occasion. the impression i got as that he was indeed searching for love, but he and the chick(s) really got on well in the physical way , so he kept getting tempted back to the, uh... 'dark side'.......... by the time pinkerton came out he went through like 20 more phases and was getting into the "time to party down" phase, which seems to have peaked during the summer 97 pinkerton tour that all these girls 'horror' stories seem to stem from.......... hence the irony: singing that song, but not at all actually "tired of it". and the seeming contradiction (above : "to stop and change. it just seems like the logical step...") yes, logical IF thats what he really thought whilst singing at the 96-97 shows, which wasnt the case as far as i know."

Although originally written as a self reflective song, "Tired of Sex" was one of several songs reworked into the unfinished "rock-opera" concept album Songs from the Black Hole as the project began to take form. In the narrative, when the character Jonas pulls away from Maria, he realizes that his lifestyle is unfulfilled - he seeks true love, not sex. "Tired of Sex" is the lone SFTBH song that has survived and appeared on all incarnations of Weezer's second album, including Pinkerton. There are two alternate versions and one demo version of the song currently in circulation. The lyrics remain the same in every rendition, save for one name change.

Cuomo implied in a 1997 Guitar World interview that the guitar melody is copied from the band Scorpions:

Tom Beaujour: Especially on the album opener, "Tired of Sex," you really let your metal chops fly [Cuomo is a reformed shredder who once studied with a member of Fates Warning--T.B.]

Rivers: I think that's the lead from the Scorpions' "Rock You Like a Hurricane"—note for note, if I remember correctly. It's either that or "No One Like You." Can I get sued for that?

On June 13, 2002, the original 1993 demo for Tired Of Sex was placed into the media section of the weezer.com, but promptly removed for an unknown reason. A thread began on the Rivers Correspondence Board where Cuomo (under the alias of 'ace') spoke about several different aspects about the creation and the vocal of the song.

"i edited it in '93. i actually physically cut the cassette tape and scotched it back together. (i think i had accidentally played the drum fill 2 beats too long)."

[In response to a question regarding knowing where to cut the tape and the authenticity of the girls mentioned]: "i guessed. i just hacked out a piece. gwen wouldn't let me use her name on the album. "lyn" was a poor substitute her parents would have figured it out, seeing as how they knew i was dating her. it wouldn't have been good."

[In response to a question asking what Rivers played on the demo]: "i played everything on the home demos which were usually recorded the same day i wrote the songs."

An rough in-studio recording of the song appeared on the second disc of the Deluxe Edition of Pinkerton in 2010, listed as "Tired of Sex (Tracking Rough)". 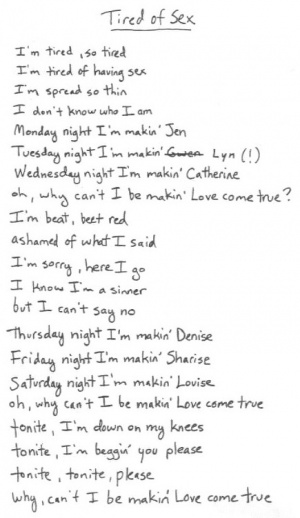 I'm beat, beet red
Ashamed of what I said
I'm sorry, here I go
I know I'm a sinner, but I can't say no

Tonight, I'm down on my knees
Tonight, I'm begging you please
Tonight, tonight, please
Oh why can't I be making love come true?