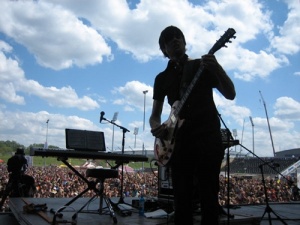 On their tour in support of Make Believe Weezer played the second day of the 2005 "Rock im Park" Festival which is held simultaneously with the "Rock am Ring" Festival from June 3 - June 5.

Editor's Note: The "Rock im Park" Festival is located in Nuremberg. Karl is confusing the locations of the "Rock am Ring" Festival and this one.

Today we awoke in Nurburg, where some heavy duty trials went down a long time ago, but where today all seems calm and trial-free. Except for at the Frankenstadion, where the Rock Im Park is going down. We rode over in the Shantymobile, which would end up being our last ride in it as our tour manager arranged for another bus to swap with after the show, so that the 6 hour drive to Hamburg didnt turn into a 12 hour drive in the Shantymobile.

So the Rock Im Park is located in a park (big suprise), with lots of woods and open areas, and what we think was the remnants of the auditorium where the propaganda film 'Triumph Of The Will' was filmed (???) Either that or it just had a lot of monumental old stone blocks and seating areas. Anyway, everywhere the festivalgoers' tents were set up and the people were settling into their open air vacations, and the empty beer containers were piling up! I saw an unusually high number of Iron Maiden t-shirts, and plenty of somewhat off-balance people exposing themselves to die welt to relieve themselves of a few litres of beer.

Because of the construction going on for next year's world cup, the festival stages had to be set up in a weird way which put the dressing rooms really far from the main stage, so it was a constant battle for a shuttle van to maneuver backstage. But the plus was getting to view the huge forest grounds everytime you had to go to the stage. Today the PA system, while identical to the Rock Am Ring's, sounded decidedly better. This festival's crew must have just had a better idea of how to set things up. In any event, crisp clear audio was the order of the day for the crowd, which is never a bad thing. Weezer shared the 3 stage bill with plenty of "heavy" bands, which tend to go over quite well at these European festivals: Mudvayne, Slipknot, Lamb Of God, and Mastodon all turned in crushing sets today. Headlining in the evening were Green Day and REM. Michael Stipe, surrounded by an impressive entourage, was spotted backstage.

The set was unchanged from yesterday, and went off without any real hitch save for a minor and humorous false start on 'Garage'. Somehow false starts are always funny in weezer, im not sure why. Again, the crowd was won over by the new Make Believe material, and was thrilled by "Island" and "Hash Pipe".