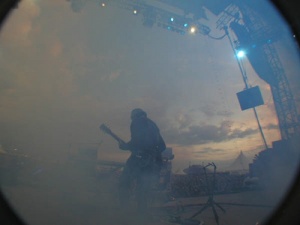 Brian at the Nova Rock Festival.

On their tour in support of Make Believe Weezer played the second day of the 2005 Nova Rock Festival held from June 9 - June 12 in Nickelsdorf, Austria.

June 9
System Of A Down, Audioslave, Wir sind Helden, Beatsteaks, La Vela Puerca, Moneybrother, Team Sleep, ...And You Will Know Us By The Trail Of Dead, The Eighties Matchbox B-line Disaster

...MB '05 Tour: Day 30: Nickelsdorf, Austria - Nova Rock Festival
Due to there being no hotel available anywhere near the festival, which is waaaaay out in the middle of nowhere about an hour or two away from Vienna, the decision was made to stay in Paris until show day (except for Rivers who decided to stay in Vienna and meet up with the rest of us at the festival), and therefore we ended up again flying on the day of the show. Upon landing at Vienna airport, we were whisked into vans and off we went into the beautiful Austrian countryside. Today the weather was quite chilly, not to mention overcast, windy and occasionally rainy. Quite a contrast from sunny Paris! Somehow European festivals bring out the heroic nature in both fans and the bands, enduring freakish weather and strange conditions, gaining strength from the camaraderie that only a muddy field out in the Austrian countryside can provide!

The festival was chock full of metal and hard rock bands today (day 2 of a 4 day festival), and in fact weezer were playing right before the mighty (and mighty strange) Marilyn Manson. Having not been to Austria since the Pinkerton tour in August 1996, and being sandwiched between some pretty tough bands, there was some trepidation that they might not be too welcome here. In the back of my mind, I was holding onto some hope, however, as I recalled that Make Believe debuted here in the top 20. The fears (of tossed bottles and mud) were instantly put to rest when the band hit the stage, where they recieved one of the warmest welcomes of the tour from a giant crowd of possibly 10 or 15 thousand wet and muddy festival goers, who seemed estatic to catch the weez. The band turned in another solid and super tight performance, electrifying the crowd.