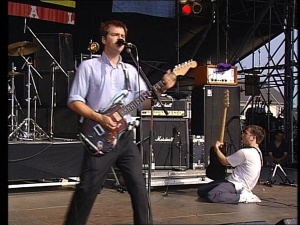 Rivers and Matt rocking out at the Bizarre Festival.

On their tour in support of Pinkerton Weezer played the first day of the 1996 Bizarre Festival held from August 17 - August 18 in Cologne, Germany.

the bizarre festival was among one of the dates during a couple weeks of european touring which took place in august 96'. the show was prior to the release of pinkerton, but the band played a mix of new and old drawing a crowd of thousands to turn head-bopping-pogo-rock-music maniacs (this is a good thing).