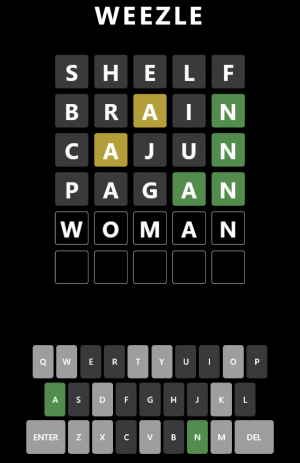 Once a day, a five-letter-word is chosen which players attempt to guess within six tries. After every guess, each letter is marked as either green (indicating a correct letter in the correct position), yellow (indicating a correct letter in the incorrect position), or gray (indicating the letter does not appear in the word). Upon successfully guessing the word, a short audio clip plays of a Weezer or Rivers Cuomo song featuring lyrics that include the word. As with Wordle, players are given the option to copy their daily results as emoji squares, for use on social media platforms such as Twitter or Facebook.