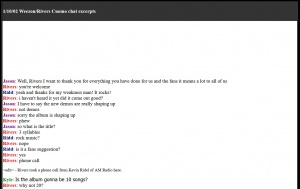 The following are excerpts from a chat that took place on AIM that were posted on the now defunct Weezon.com. In the interest of posterity, they have not been edited for typographical errors by Weezerpedia. -megasnorkel

Jason: Well, Rivers I want to thank you for everything you have done for us and the fans it means a lot to all of us

Ridd: yeah and thanks for my weakness man! It rocks!

Rivers: i haven't heard it yet did it come out good?

Jason: I have to say the new demos are really shaping up

Jason: sorry the album is shaping up

Jason: so what is the title?

Ridd: is it a fans suggestion?

Rivers took a phone call from Kevin Ridel of AM Radio here.

Kyle: Is the album gonna be 10 songs?

Kyle: 20 would be tight...I was just wondering.

Rivers: so then, how many?

Jason: So rivers Was the change to standard tuning a concious one?

Jason: for the green album?

Jason: and the new stuff?

Rivers: 3 more songs; what will they be?

Kyle: We Go Together, Slob, The Dawn.

Ridd: but extend the solo on slob

Ridd: haha yeah - didnt he do the good life solo?

Rivers: gl was mostly me. he did why bother. el scorch

Rivers: where can i hear the spaceland version

Rivers: who videoed it?

Ridd: dude you have no idea how much of your stuff is out there

Rivers: you have no idea how much of it isn’t

Kyle: Are the other Black Hole songs as good as blast off?

Rivers: it was supposed to be a whole album of songs transed together

Ridd: why'd you ditch the idea?

Rivers: plus it was kind of a lame idea

Kyle: Maybe...but those songs are sweet

Rivers: well 4 of the songs are the ones on pink

Rivers: and the bsides youve heard

Kyle: Was 'Who You Callin' Bitch' a response to that line in Blast off....'hold on, who is it here that i see, wasn't she your favorite bitch...'

Rivers: sung by a female character

Kyle: Cool. But do you sing it?

Rivers: on the demo

Rivers: one of m y all time favs

Ridd: the 'tude on slob?

Rivers: to each his own

Ridd: well - maybe you can try to record it tonight and fix whatever u think is wrong

Rivers: i hope we can keep the tude though

Ridd: can we post some of this conversation again?

Rivers: i hate having to say the same things twice

Ridd: okay. did u talk to rs yet? *Rolling Stone

Ridd: did the correspondence come up at all?

Rivers: yeah she saw it

Rivers: she'll prolly see this too

Rivers: i was boring

Ridd: so - when do you realistically expect album 4 to be out - with all the label nonsense and all.

Ridd: okay. You're going in for mixing next week?

Ridd: good choice. I like what he did with Pink Triangle

Rivers: good. me too.

Rivers: i'll be a little more involved this time too

Ridd: good good. What about the rest of the band - do they participate on that end at all?

Ridd: do you have a tracklist nailed down yet?

Jason: help with the tracklist?

Ridd: know how many songs yet?

Rivers: you tell me

Jason: I think 15 or even more would be cool because everyone was like oh the green album is only 28 minutes

Ridd: and you've decided on a title... what was it again?

Jason: This is hard a lot of good material

Jason: the opener should be really upbeat

Jason: like my name is jonas don't let go tired of sex

Kyle: The dawn is my vote, though/.

Ridd: I really like the dawn as the opener as well, but it might be because you opened with it in Seattle and I loved it. That was the best performance of it, imo

Rivers: oh yeah i forgot about that song!

Ridd: I Do was cool

Rivers: i sang it lame though, huh?

Kyle: I always thought so.

Ridd: during the Green phase you mean?

Ridd: what do you attribute this recent desire to go back to personal lyrics to?

Ridd: nice. That'll do it

Kyle: Who is Sarah?

Ridd: the slide work in Love Explosion is killer. I think you should do more. Is it you playing?

Ridd: Are you happy with the Photograph video?

Jason: So rivers is it scott being there that is making you guys play more?

Jason: I mean the muscianship has been upped a lot.

Jason: it is rocking

Rivers: he's a joy to play with. he makes it more fun.

Jason: well on reverb you looked so excitied to be playing

Rivers: i didn't see it

Rivers: i heard they mixed my gtr out

Ridd: do you guys ever get sick of all the recording? I mean you must get pretty tired. Is everyone cool with it?

Rivers: its actually only a couple hours a day

Ridd: Do you play live most of the time, or is it tracks first, then vocals.

Rivers: we have a pretty cool sched now which involves live takes and overdubs and bit of rough mixing

Ridd: what does entered the moebius strip mean?

Rivers: he went down as we went up

Rivers: it blew a gasket in my mind

Ridd: anything you'd like to say to your fans that have been giving you feedback?

Rivers: just keep on doin what you're doin