Don't Call It a Comeback
By Beatrice Springborn 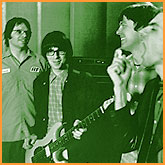 Weezer, the alt-rock group that made geek chic, is back.

The band hasn't put out an album since 1996's Pinkerton, but they're still as popular as they were during their Grammy Award-winning "Buddy Holly" period (remember the Happy Days-style video?) in 1994.

Now touring the U.S. with the Warped crew and solo, the group is trying out fresh songs for an album due out in early 2001 and a new band member, bassist Mikey Welsh.

Weezer also has an opportunity to put to rest some of the Internet rumors that have cropped up in their four-year absence: that lead singer Rivers Cuomo is married to Lisa Loeb; the band members are married and have kids; and Weezer is a premade boy band just like ‘NSYNC.

Truth be told, Weezer is just four guys who rock 'n' roll. And for being out of the spotlight for so long, they still have a zealous following. Fans mob them at shows, and other bands, like the Deftones and the Bloodhound Gang, have paid tribute by covering their songs. Sugar Ray even wrote a song about Cuomo, called "Rivers," for the Scream 2 soundtrack.

The fans outside the band’s show at the Crest Theater in Sacramento, Calif., are surprisingly young. Most of these kids were 12 when Pinkerton came out and in elementary school when Weezer was released in 1994.

Nicki, 19, hangs outside the theater with a group of friends. For her, the group is a part of her past.

"I hear all their songs," Nicki says, "and it takes me back to eighth grade and freshman year. They were so catchy and had such a new sound. And they still sound new."

Weezer sound fresh because they aren’t just a one-trick pony. They can play crowd-pleasing hits like "Buddy Holly" and "Undone - (The Sweater Song)," and then bust out with a sad, powerful chorus like the one on "Why Bother?"

And new bassist Welsh supplies the band with a jolt of rock ’n’ roll energy. He replaces original member Matt Sharp, who left to do his own thing with The Rentals.

Welsh, who is covered in tattoos, looks a little harder than the rest of the band, but it's all show. He used to play with Juliana Hatfield.

Karl Koch, Weezer's roadie extraordinaire and close friend, has been with the band since early 1992 and is considered the fifth member of Weezer.

"Welsh gets pretty wild at times but is very gentle at heart," Koch says.

And Welsh may be the kick that Weezer needs to get their new songs recorded and promoted. Koch says he was a natural choice to replace Sharp, because "he rules on bass, he plays old Fenders, he isn't an asshole, and he only wants to record and tour — nothing else. He gets a little moody when there’s too much time off."

Welsh sat down with us before the group's Sacramento show and gave us the scoop on Weezer’s whereabouts, fans, and R&B.

ChickClick: How do you entertain each other on the tour bus?

Mikey: Pat and I run around the tour bus with our butts hanging out of our pants. We'll do typical rock guy things like throw food at each other, chase each other around the bus and have wrestling matches.

CC: I've read that the Weezer members would make a great TV variety-show cast, but Rivers [Cuomo, Weezer's introvert lead singer] would be too depressed for primetime. Is that a fair comment?

Mikey: Well, I suppose so, but more than anything he’s just honest about his feelings. He’s a very fun-loving and sweet guy.

CC: Who would play you in the show?

Mikey: That's such a hard question. I think Charlie Sheen would do a good job. [laughs] Or the guy who played Sick Boy in Trainspotting.

CC: Does Weezer consciously do a lot of all-ages shows?

Mikey: Absolutely and it's pretty easy to do. We have a lot of young fans so we almost have to. I suppose we don't have to but it's almost better to do that because we shouldn't be excluding any fans. Our shows aren’t about scenesters going to a club and drinking beer, it’s more of a musical experience. The younger fans are very excitable and it makes it more fun for us.

CC: Your songs range from total longing to complete heartbreak.

CC: What makes for a better song? Unrequited love, true love or heartbreak?

CC: When I told the kid who works at my neighborhood record store that I was interviewing you, he said, "Man, ask them why they put out such a commercial album like Weezer and then had that kick-ass Pinkerton." What do you want people to say about the third album?

Mikey: I hope they say, "God, I'm so glad these guys are still together, and they have made this really beautiful, amazing brilliant album." But what the hell is wrong with making money and being artistic?

CC: There are a lot of rumors about Weezer on the Web, like that you're a premade boy band. How do you respond to these?

Mikey: A lot of them make me laugh. Some of them are fairly annoying. A lot of these kids don’t realize we're real people with families who read this stuff, and it's not amusing to them. It's not the greatest thing if you have a little niece or nephew saying, "Uncle Mikey is a heroin addict!?" That's not cool.

CC: Those rumors could also be fueled by the fact that you’ve been out of the public eye for four years.

Mikey: I can say that that is the longest break that Weezer will ever have in their career. We are very intent on being as busy as we possibly can be for a long time.

CC: I've heard people say that Weezer could make a comeback as the next blink-182.

Mikey: You're implying there is too much testosterone on the Warped Tour? I think people love songs they can sing along to and that was probably one of the reasons we got such a great reception. We were the only band that was so different, musically.

CC: What Prince song or R&B cover would Weezer do?

Mikey: I think "Purple Rain," "Sexual Healing" by Marvin Gaye or "This Is a Man’s World" by James Brown.

CC: What about "You Remind Me of My Jeep" by R. Kelly?

CC: Why do all the ladies love Weezer?

Mikey: I think it would just have to be our undeniable good looks and soulful grooves.