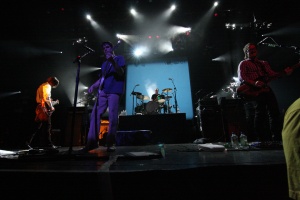 *Special Announcement* Contrary to whats been mentioned in some interviews and advertisements, the order of the sets the band is playing at these Memories shows is: FIRST the greatest hits set, THEN the classic album set (i.e. Blue or Pinkerton).

...Well, a heck of a lot of preparations have been worked on ceaselessly for the last 2 months, and it all comes down to tonight at the Gibson Amphitheater! The Memories Tour kicks off tonight in LA, with the Blue Album plus more set being featured. Sonically and visually, the devil is in the details and these devils have been addressed! The people who ponied up for the I Love All Access VIP treatment are in for some wicked treats, but the cool thing is that everybody, no matter what seat they are in, is in for a major treat! These shows are all about celebrating the bands history while also celebrating the present - we've come so far over the last 18 years, and in many ways, things are just getting started for weezer!

The first night of the Memories Tour was consigned to history tonight, with a packed Gibson Amphitheater seeing Weezer nail the entire Blue album, after a rousing set of other album's hits, including the Pinkerton track "Falling For You" which wasn't a "hit" by radio standards but is certainly a very much well loved "hit" by hardcore weezer fan standards! Certain songs had not been tackled by the band in many years, like "Holiday" and "Only In Dreams". And "The World Has Turned" hasn't been played on stage by weezer in 16 years!

It was an emotional night for yours truly, having been on the weezer scene for 18 years running now. And the audience was clearly as stoked as I. Many chills were running down many many backs...

At the same time, like with any tour, once you have the first show you see what could be improved. And the tweaks and minor adjustments are coming that will take us into the stratosphere!

Thanks to all for enduring my Memories slideshow during the intermission. It sounded like most people really enjoyed the trip down memory lane. I enjoyed hosting it!

Huge props to all fans, all old school fans, all original fanclub members, all RWA-ers, all boardies no matter what site you hang out on, and the I Love All Access VIPers who looked pretty darn stoked with their meet-n-greet with the band, backstage pre-show tour (w/ yours truly), VIP only merchandise goody bag, and front row spots! Thansk to the ILAA folks for kicking butt and Im looking forward to working with you on all these shows. Ups to Jorge who sang on "If Youre Wondering.." with Rivers, Bethany from Best Coast who sang with Rivers on "Island", Elena Jensen and all the old schoolers in attendance, and to the people who came VERY far to see this show - Australia, Japan, France... you know who you are... thanks.

Post show, Brian ran up to the merch booth to do a special signing of his new Relationship CD. He had the full on notary public set up, making sure each of his autographs was official! He will continue to do this at every Memories show, FYI!

Comment here if you went, or start a thread on our message boards, tell your tale!

To see these pix individually and larger, click here.

Props to Travis Schneider for the "huge Hurley" and "Brian signing" photos, and to "How To Be Tight" Chazz for his "what i did after the weezer show" pic! Typical Chazz!

More cool pix from this show by O at whatosaw.com.

...REMINDER: Here's a nice way to score some weezer goodies - go and download Gowalla at Gowalla.com for your smartphone - iPhone, Android, Blackberry, Palm, etc. Then use it to check-in at any Memories Tour date and get a free Weezer download, an exclusive Weezer badge, and connect with fellow weezer fans at the show!

...REMINDER: Weezer's all new online store is up now!