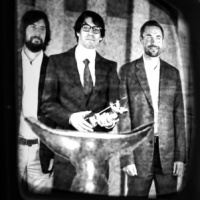 The Astronauts, as seen in teaser 24

The Astronauts are a fictional band from the 2014 Weezer concept album Everything Will Be Alright in the End. They are based on the band Weezer, with the lead musician, Sebastian being largely based on the real life of Weezer front man Rivers Cuomo. The band appears to have at least two additional, unnamed band members, as seen in the final teaser video.

Though the exact chronology of the album's narrative is difficult to ascertain, the band is likely formed after Sebastian moves to Los Angeles. At some point in the band's history, they win an award for Album of the Year, which Sebastian dedicates to his late father, Joe Laffoley. Sometime around 1996 or 1997, the band releases an album titled Help Me, with a song titled "My Body Pain", which is critically panned (a likely nod to the album Pinkerton, which featured a song referencing Cuomo's painful leg surgery). The album's opening track, "Ain't Got Nobody", features a vocal clip (credited in the liner notes as "RFJT DJ", voiced by comedian Jake Fogelnest) that says "In the "Where Are They Now?" category: The Astronauts, with their first big hit..." before the lyrics "Ain't... got... nobody" fade in, possibly suggesting that "Ain't Got Nobody" is meant to be an Astronauts song. In one video, the character George Blotkin references a song titled El Scorpio.

Rivers Cuomo dressed as Sebastian (wearing a white jumpsuit with an American flag and a name tag reading "Sebastian") during the Everything Will Be Alright in the End Tour and is credited as Sebastian in the tour program[1]. He also wore the outfit in the music video for Back to the Shack which, in keeping with the Astronaut theme, takes place on the surface of the Moon.

As early as 2011, Rivers Cuomo is known to have been experimenting with the idea of a concept album, uploading videos alluding to a potential Sea Opera concept. According to fans present at listening parties during the period, the concept would have featured a fictional band standing in for Weezer named The Roaches. It is likely that this concept later evolved into the idea for The Astronauts.