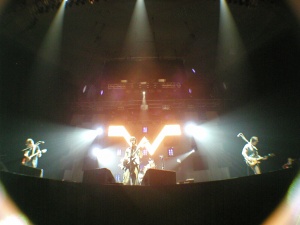 On May 27, 2002 Weezer performed in Tokyo, Japan at the Nippon Budokan on the Japan World Cup Tour in support of Maladroit. The opening act was AM Radio.

...after a special trip to "The Yellow Hat" store for all our Subaru accessory needs, it was off to the world famous Budokan hall, which was introduced to rock and roll by The Beatles over 30 years ago, and has become known for its elite status of shows ever since. Only the bands who have really made an impact on Japan have played this place, and its really got an air of reverence for all the heavy duty Sumo and Rock action that has taken place there over the years. Our sound man thought it would be clever to play Cheap Trick's live "At Budokan" album before weezers set tonight, but I was worried that playing "At Budokan" IN Budokan would send us all through a hole in the space-time continuum. I was wrong, fortunately. No big suprises in tonights setlist, but several songs appeared that have only very recently seen performance. Soundcheck time saw some run-throughs of the electric-style "Butterfly", but apparently the song wasnt ready for prime time.

Big giant thanks to the weezer crew and the Japanese crew for rocking the gear, transportation, and organizational duties with aplomb! The World Cup Tour '02 went off really smoothly, and all the hard work paid off in spades!

...The last show in Japan was brilliant, but different since it had more people, and the concert hall was seated. Unfortunately, the performance of AM Radio was the worst ever because we, 9000 Japanese fans, weren't really ready to get excited and most of them stayed seated for some reason (AM Radio did a great job, though). The set list of the Weezer's show wasn't too bad since it covered some major songs that helped us to sing along, but it wasn't the best. However, since I went to three concerts in Tokyo, I was just happy to listen to most songs from albums that I wanted to listen to. I still feel sad that I missed a chance to enjoy "Across the Sea", but now I have a reason to come back to the next show in Japan! (Hopefully this is going to happen soon!) The coolest thing I saw today at the show was to see a guy who looked like in his 50th and wearing his business clothes. He was coming to the show by himself, but seemed like having fun so much. Some people even might have thought he was so out of place since most Japanese fans are young and I also wondered how he could know about Weezer. However, at the same time, I think it is so great to have fans from different generations and to share wonderful time together ! Anyways, I just want to say to the guys that thank you so much for giving me such a wonderful time and I really hope that they'll come back soon and have more fun again in Japan ! ---Yoshiko#3

...Weezer's performance was very wonderful -- carrying out -- everybody -- even if -- I think that it was fortunate But it is whether Rivers having been fortunate supposing it carried out or, and thinking that it does not put in. A Japanese peaple is not good at taking out feeling to a table. Therefore, possibly everybody's feeling was not transmitted. What did Karl think? I am full of the feeling which does not live in weezer. Although he wants to write mail and a letter to Rivers, where should it send? Please let me know an address. If you please, don't become disagreeable about Japanese peaple. Moreover, please come to Japan. Thank you for wonderful show. thank you,with love ---Ryoko.

...i got to the concert area around 4 in the afternoon. i started to walk around while i waited for the Weezer goods to go on sale. and then i bumped into Kevin Ridel from AM Radio! i took 2 pix with him and talked to him for a bit; he was soo nice! i told him i was moving back to LA this summer so he said i should come to their shows there. then i walked around a little more and saw a handsome american man in pastel blue shirt... it was karl! he was SO good looking in person, i didnt really know what to say besides `i love your website!`... The concert started around 6:30pm with AM Radio... they really rocked=) Kevin kept on saying things like: tokyo arigatou!! after they sang, there was a break for about 20 minutes until Weezer came on. Weezer opened with "Island in the Sun"! ...it was such a great show... they played 3 Pinkerton songs: "El Scorcho" (im also a half girl...so this song made me cry!), "Falling for You" (soo beautiful i cried again; i`ve been dying to hear this song; thank you rivers!!), and "The Good Life"! They sang a lot of hit songs like: "Surfwax", "Photograph", "No One Else", "Don't Let Go", "Dope Nose", "Burndt Jamb"!, ..they also played "Buddy Holly" with that awesome intro (just like the one they played on mtv with Mikey!)...Pat also sang "The Story Is Wrong"...(i love his voice!) ...and for the encore Weezer played "Hash Pipe" ^. ^ Rivers was very talkative tonight... he said things like: oiiiiiii! budoukan rocks!, pokari sweat (its a japanese sports drink) oishiii! daisuki!, were going to rock it american style!, Tokyo...we came, we saw, we conquered...You know what i mean. (???)...Everybody say ooohh ohhh (nobody said it, lol)... Anyways, it was a fun show...Brian looked very hot in jeans and a tight black shirt...Mm! and Scott waved at us. After "Hash Pipe" only Rivers and Scott stayed on stage for a long time just playing little guitar things and crouching on the ground...we all thought they were going to play something else but in the end they just walked off stage...=D ps. rivers voice was slightly husky tonight so it made it sound especially beautiful and sexy. Thanks guys! ---priincesss (kristie)