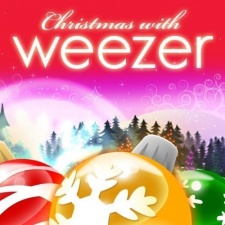 Christmas with Weezer is a six-song EP of Christmas carol covers performed by Weezer. The songs were originally released as part of an IOS application of the same name developed by Tapulous, the creators of Tap Tap Revenge. The EP was released on digital music platforms on December 16, 2008, and received a CD release in Japan on November 2, 2022.

The Tapulous application was released on December 5, 2008, and featured gameplay similar to other rhythm games (such as Guitar Hero and Rock Band). The songs were originally intended to be available exclusively through the phone game, however fan outcry led to them being partially remixed and released as an official EP on digital music services shortly after the app's release. The EP's cover artwork is the same as the game's logo.

The EP received a limited physical CD release in Japan in 2022. It was released alongside 25 other Christmas-themed albums and EPs on the Universal Music label, as part of a set of CDs dubbed the "Christmas Album Masterpiece Collection".