Featured song: "Lover in the Snow" 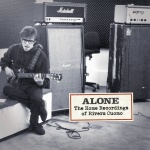 "Lover in the Snow" is a song written by Rivers Cuomo in 1997. It is the thirteenth track from the compilation Alone: The Home Recordings of Rivers Cuomo, released in 2007.

Cuomo wrote and recorded "Lover in the Snow" sometime in 1997 or 1998, while living in Cambridge, Massachusetts. He envisioned the song as part of the unrealized project "Lovely," which he has described as "a reaction to the reaction to Pinkerton." "Lover in the Snow" embodies the songwriting approach he was using, which was in part an effort to write in a "more minimalistic, less personal style."

The song was first leaked on the Rivers Correspondence Board by Cuomo himself in 2002. It saw official release in 2007 in a shortened form on the compilation Alone: The Home Recordings of Rivers Cuomo, but the full unedited demo was included in 2020 the digital demo bundle Alone VI: The Black Room.

On March 19, 2008, a music video for "Lover in the Snow" was released via Cuomo's MySpace page. The video features a foreword in which Cuomo explains his history with the sport of soccer, and includes footage of himself training for and participating in Mia Hamm and Nomar Garciaparra Celebrity Soccer Challenge in January 2008. The video was directed by Karl Koch.

The song was performed by Cuomo with fans at Fingerprints record store in Long Beach, California on November 25, 2008. This performance was featured on the DVD release of Not Alone: Rivers Cuomo & Friends Live at Fingerprints in 2009.