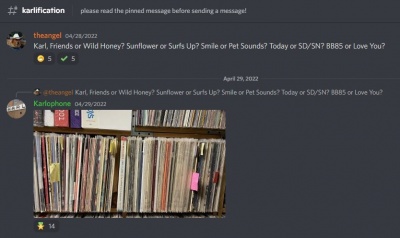 Karl answers an important question via the "#karlification" channel

In 2022, Karl Koch joined the official Weezerpedia Discord server. Shortly after, a channel inside of the server titled "#karlification" was created with the intent to host an ongoing Q&A session with Koch. The channel was opened on March 22, 2022, allowing any user of the server to ask questions of Koch.

This page collates notable messages sent by and questions asked of Karl Koch on the official Weezerpedia Discord server, including those outside of the "#karlification" channel.

Listed timestamps include the time of the initial response (in PST/PDT) by Koch, as well as the channel it took place in.