Rivers Cuomo performing in Columbus
On July 18, 2002 Weezer performed in Columbus, OH at the Polaris Amphitheater on the Enlightenment Tour in support of Maladroit. The opening acts on the main stage were Sparta and Dashboard Confessional. Loudermilk, Home Town Hero and AM Radio performed on the side stage.

07/18/02 get off your horse and jam
Enlightenment Tour Day 13: Columbus, OH; Polaris Amphitheater


An absolutely vicious thunderstorm nearly derailed the show today, rolling in without warning at about 3:30. The rain came in horizontally as a wall of mist and water, forcing rapid deployment of the tarp system always on hand at these semi-outdoor events, to save the mixing consoles and other gear from certain doom. Then the lightning struck and struck hard!! A series of deafening booms immediately followed a set of massive lightning bolts that struck right on the grounds of the Polaris. Power was intentionally cut to the stage area, to ensure that any possible strike didnt travel to the sensitive equipment and fry out the gear needed to do the show. Meanwhile the band and crew huddled at the fringes of the stage in a mixture of fascination and concern. fortunately, the storm wasnt very long lasting. After about 30 minutes of delay, the sun broke thru and the storm was said to be moving East rapidly. Soundcheck resumed and the show was back on track.

"Weezer World Cup" Foosball Challenge #3: Columbus- WWCD CD101.1
Foosball Challenge #3! Today before the show there was another fan vs. weez foosball challenge. In many cities on the Enlightenment Tour, the local radio station will be choosing winning fans who get to come backstage before the show and challenge the band to a mini-foosball tournament! [your local radio station should be talking about the contest, if theyre not, then its not likely to be happening in your area]. There are usually 6 winners per show, and they divide up into 3 teams who face off vs weezer for one game each. 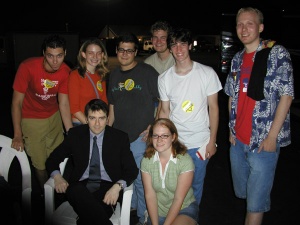 ...What a great show. I saw Weezer three times on Pinkerton tour and once in 2000. I was actually really surprised, but this may have been the best show yet. Set list stacked with Blue Album and Pinkerton tracks. Seven songs from Pinkerton and six from Blue album including a great version of Only in Dreams. I am home tonight figuring which city to fly into so I can experience some more of this great tour. Thanks for keeping the long time fans in mind. ---Matt

...I just returned from the Columbus Weezer show, and there aren't words to describe what I've just witnessed. I've been to my share of Weezer performances but this one was by far the most amazing. It all started with getting a chance to catch a glimpse of Karl. I pointed out to my sister; Karl in his bright orange shirt doing what I assume is his pre-show work. We were both pretty excited then the guys in front of us called him over to our section! They talked to him for a while and of course we sat there, too shocked to say a thing. That was just the beginning of an astonishing evening. Sparta started off the night with some pretty good music for a fairly unknown band. Next was Dashboard Confessional. They being a little more popular had a much larger fan base than Sparta. Those DC fans sure do know how to show the love to their favorite bands. But nothing can beat the Weezer fans. The set list was incredible. They couldn't have created a better blend of old and new. The pyro was awesome; the fans were wonderful, and the boys of Weezer sure do know how to make a crowd go crazy. Keep up the good work guys, you've built quite a loyal fan base and now I know why. -Becky Reed, Columbus, OH