...today the guys continued the intensive "process of weeding out". I would say that about 25 songs have gotten the ax, with another 20 or so on "thin ice"...also, several tracks seem to be breaking out of the pack, receiving extra attention and re-work down in rehersal. Things are looking good for having it down to a killer set of songs by the time Ric O. shows up...Also of note is a slowdown in the production of new songs from Rivers, as the focus shifts to refining the "chosen ones"... 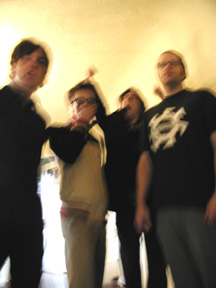 ...Well, a heated conflict has erupted since the posts of the last few days, with tons of fans writing long and expressive essays to me, debating the "selling-out/not selling-out" issue to the extreme! The guys in the band and I are very suprised at all the controversy... We have discovered that many more people than we could have ever expected have intense feelings, both positive, negative (and sometimes both) on the issue! I must thank each and every person who has written in with their thoughts, whether you were amongst the big pile of people disagreeing with the "sell-out" theory, or the somewhat smaller but still passionate group who had further concerns to voice. Make no mistake about it, the band is listening to your voices, and taking careful notes! I decided to post two further examples of the points of view, out of a HUGE pile of emails...

"...The only thing that bothers me is that Yahoo is sponsoring the tour. That left a bad taste in my mouth the
first time I heard it. Why does it have to be sponsored by anybody? In your
response to that one e-mail, you talked about how Yahoo was giving
you guys full control of the tour. This still doesn't stop the fact that
Yahoo's name will be attached, in some form or another, to each show that
Weezer plays, and therefore each show is an advertisement for Yahoo. It's
the same as if the tour were sponsored by Coke or Pepsi (i.e. the Spice Girls).
I know a lot of fans aren't too happy with this turn of events, and I hope
that the Weezer camp will really reconsider doing this in the future.
Because in a way, I feel kind of betrayed that you guys would do this. I
always thought that Weezer wasn't about "cashing in" when the opportunity
arises. I will remain a fan of Weezer because they make great music, but right now I
find myself losing some respect for them as individuals."

about this selling out business, it's all bulls**t.
There is a common phenomena I like to call the "unneccesary
elitist attitude" where kids, especially in the punk rock world, compete
to see who is the most underground, obscure music fan. This makes them
cool because they're not like everybody else, right? yeah right.
look around, everybody's trying not to be cool. that's what is in itself
"cool" these days. I think the "true" music fans, myself included,
don't care if you're mainstream or not.. only if you're good.


...the true weezer fans will be there when (everybody else has forgotten about) weezer...
I know you already know this, just letting you know how a lot of us feel."


note: the above letter was the one orignally intended to occupy this space, and was accidentally temporarily switched with another one.

at press time: Lowell, Mass; Los Angeles, Detroit, Philadelphia, Chicago, and amazingly, New York, which I didnt even get a chance to post was going on sale today, before the sell-out happened less than 12 hours later....wow. This is getting crazy...

...the video interview that Mikey and Brian did at the August Irving Plaza show is FINALLY up at Spin.com. This link currently goes directly to the weezer interview. it might be someone different next week... ...also see the new Alternative Press (January, with Tool on the cover) for a neat little weezer article featuring a full page possibly-somewhat-familar 'spaced-out' picture.....