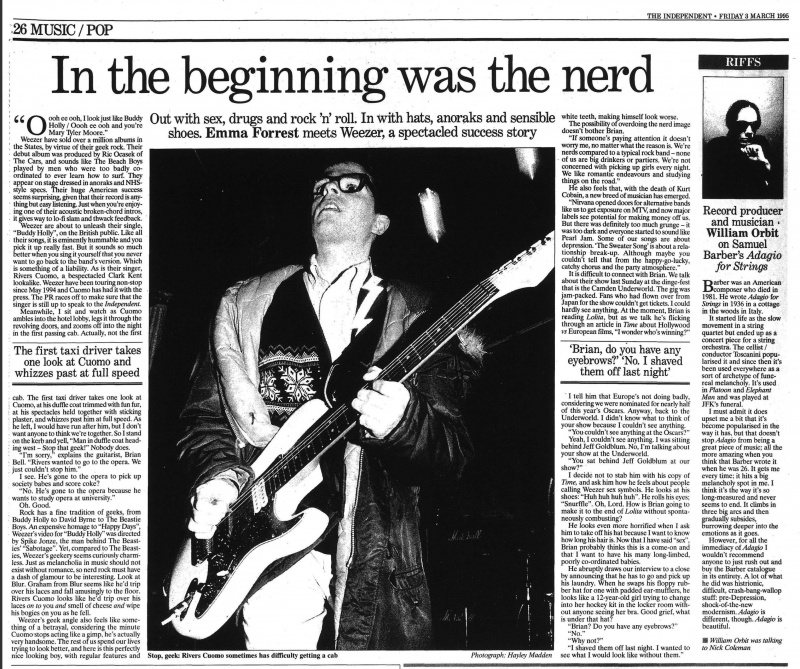 In the Beginning Was the Nerd

Out with sex, drugs and rock 'n' roll. In with hats, anoraks and sensible shoes. Emma Forrest meets Weezer, a spectacled success story The first taxi driver takes one look at Cuomo and whizzes past at full speed 'Brian, do you have any eyebrows?' 'No.’

Weezer have sold over a million albums in the States, by virtue of their geek rock. Their debut album was produced by Ric Ocasek of The Cars, and sounds like The Beach Boys played by men who were too badly co-ordinated to ever learn how to surf. They appear on stage dressed in anoraks and NHS-style specs. Their huge American success seems surprising, given that their record is anything but easy listening. Just when you're enjoying one of their acoustic broken-chord intros, it gives way to lo-fi slam and thwack feedback.

Weezer are about to unleash their single, "Buddy Holly", on the British public. Like all their songs, it is eminently hummable and you pick it up really fast. But it sounds so much better when you sing it yourself that you never want to go back to the band's version. Which is something of a liability. As is their singer, Rivers Cuomo, a bespectacled Clark Kent lookalike. Weezer have been touring non-stop since May 1994 and Cuomo has had it with the press. The PR races off to make sure that the singer is still up to speak to the Independent.

Meanwhile, I sit and watch as Cuomo ambles into the hotel lobby, legs it through the revolving doors, and zooms off into the night in the first passing cab. Actually, not the first cab. The first taxi driver takes one look at Cuomo, at his duffle coat trimmed with faux fur, at his spectacles held together with sticking plaster, and whizzes past him at full speed. As he left, I would have run after him, but I don't want anyone to think we're together. So I stand on the curb and yell, "Man in duffle coat heading west - Stop that geek!" Nobody does.

"I'm sorry," explains the guitarist, Brian Bell. "Rivers wanted to go to the opera. We just couldn't stop him."

I see. He's gone to the opera to pick up society babes and score coke?

"No. He's gone to the opera because he wants to study opera at university."

Rock has a fine tradition of geeks, from Buddy Holly to David Byrne to The Beastie Boys. An expensive homage to Happy Days, Weezer's video for "Buddy Holly" was directed by Spike Jonze, the man behind The Beasties' "Sabotage". Yet, compared to The Beasties, Weezer's geekery seems curiously charmless. Just as melancholia in music should not exist without romance, so nerd rock must have a dash of glamour to be interesting. Look at Blur. Graham from Blur seems like he'd trip over his laces and fall amusingly to the floor. Rivers Cuomo looks like he'd trip over his laces on to you and smell of cheese and wipe his bogies on you as he fell.

Weezer's geek angle also feels like something of a betrayal, considering the minute Cuomo stops acting like a gimp, he's actually very handsome. The rest of us spend our lives trying to look better, and here is this perfectly nice looking boy, with regular features and white teeth, making himself look worse.

The possibility of overdoing the nerd image doesn't bother Brian.

"If someone's paying attention it doesn't worry me, no matter what the reason is. We're nerds compared to a typical rock band - none of us are big drinkers or partiers. We're not concerned with picking up girls every night. We like romantic endeavours and studying things on the road."

He also feels that, with the death of Kurt Cobain, a new breed of musician has emerged.

"Nirvana opened doors for alternative bands like us to get exposure on MTV, and now major labels see potential for making money off us. But there was definitely too much grunge - it was too dark and everyone started to sound like Pearl Jam. Some of our songs are about depression. 'The Sweater Song' is about a relationship break-up. Although maybe you couldn't tell that from the happy-go-lucky, catchy chorus and the party atmosphere."

It is difficult to connect with Brian. We talk about their show last Sunday at the dinge-fest that is the Camden Underworld. The gig was jam-packed. Fans who had flown over from Japan for the show couldn't get tickets. I could hardly see anything. At the moment, Brian is reading Lolita, but as we talk he's flicking through an article in Time about Hollywood vs European films, "I wonder who's winning?"

I tell him that Europe's not doing badly, considering we were nominated for nearly half of this year's Oscars. Anyway, back to the Underworld. I didn't know what to think of your show because I couldn't see anything.

"You couldn't see anything at the Oscars?"

Yeah, I couldn't see anything. I was sitting behind Jeff Goldblum. No, I'm talking about your show at the Underworld.

"You sat behind Jeff Goldblum at our show?"

I decide not to stab him with his copy of Time, and ask him how he feels about people calling Weezer sex symbols. He looks at his shoes: "Huh huh huh huh." He rolls his eyes; "Snurffle." Oh, Lord. How is Brian going to make it to the end of Lolita without spontaneously combusting?

He looks even more horrified when I ask him to take off his hat because I want to know how long his hair is. Now that I have said "sex," Brian probably thinks this is a come-on and that I want to have his many long-limbed, poorly co-ordinated babies.

He abruptly draws our interview to a close by announcing that he has to go and pick up his laundry. When he swaps his floppy rubber hat for one with padded ear-mufflers, he looks like a 12-year-old girl trying to change into her hockey kit in the locker room without anyone seeing her bra. Good grief, what is under that hat?

"Brian? Do you have any eyebrows?"

"I shaved them off last night. I wanted to see what I would look like without them."