UPDATE: see below for both Sheeny's and fans' accounts of the GP show, plux mucho pictures!

...tonight, much to everyones suprise, Goat Punishment played a show at the Knitting Factory in Hollywood. What songs did they play? What was it like? Who else played? Who was there? Like most of us, I was not there, though that situation will change by the time of the next Phantom Goats show, the details of which are slowly coming into focus...like the the clues did for Johnny Depp's character in "From Hell". His vitriolic ruminations solved the case, like a boa constrictor or some other great serpent, narrowing in on its prey.

*whew* ...anyway, I hope to get some official word and hopefully some pix from Sheeny the Organized, and I welcome any fan accounts of this show as well. any new info gathered about this show will be added to *this post*, even if new posts are put up in the meantine. Thanks!

...UPDATE: here it is, the Sheeny Report!

"There was a great air of excitement and anticipation all day at the Knitting Factory, both within the band and with the crowd. It’s a very small, intimate club and proves to be a perfect platform for shows like HBO’s Reverb. Soundcheck looked and sounded really amazing on the monitors and it was obvious that the evening was going to be very special.

"By the time the room was filled with eager Weezer fans the anticipation was almost unbearable. AM Radio did well to hold off a few over-eager Weezer fans and did a feisty set that turned more than a few of the crowd to their favor. Weezer then took the stage and delivered a s-weet 15 song set. There was the usual shouting for the oldies but no one there seemed to mind that they were being held privy to a batch of never before heard songs-- they just rocked so much you couldn’t. Almost half of the setlist consisted of songs that were premiered live here-- Faith In the Light, My Weakness, Change the World, The Dawn, Living Without You. It was a big night in Weezer history and everyone there seemed to realize what a great experience it was to see them in this type of setting. If the airing of the show on HBO captures even half of the mood in that room, it’s going to be awesome." 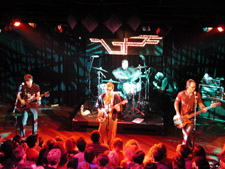 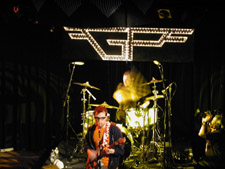 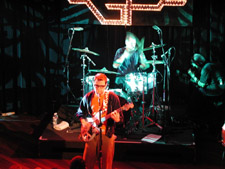 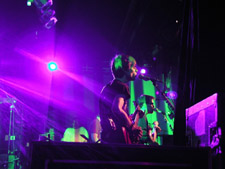 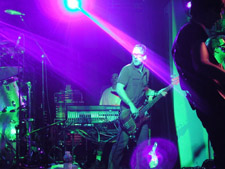 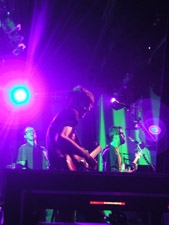 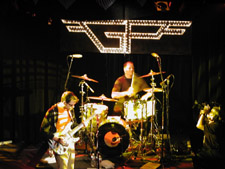 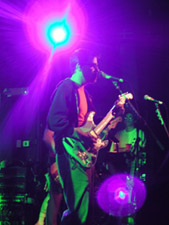 ...UPDATE:FAN REPORTS from the show:

punishment last night, after waiting in line from 7:30
to 11, ( there was a bomb threat or something) we
finally got in. Am Radio played and they were pretty
good, then the guys from hbo stopped taping and gave
up there front row spots. the show was amazing, the
best =w= show ive ever been to. the whole gang was in
a very good and playful mood and the music rocked.
brian gave me the set list after the show... [see setlist in Sheeny's pictures, above]
I was wearing my =W= underwear and told rivers which
made him laugh, i also told him to take off his pants,
which he unfortunatly did not do :(. The whole group
was in a very happy, fun and playful mood, making joke
and smiling the whole time. right before they played
"Your Room", pat and rivers had to have a pow wow b/c pat
wasnt sure how to play it . at the end of the show
during hash pipe i believe some guy crowdsurfed onto
the stage, stood there for a couple secounds and then
jumped back into the crowd right before the stage crew
could reach him. thanks Goat Punishment, that was one
of the best nights of my life." ---chloe
despite the many wailings of the fire alarm, and delays caused by the fire department (still not sure what was going on) goat punishment went on to play an extremely rockin set. wailing out a few from the :::green, a few newbies from the midget tour, but mostly brand-spankin new songs that you couldn't help but salivate over. ensuring us, the fans, there was going to be an ear-shattering encore, Rivers said :::humbly, "Alright. We're gonna play one more song, then we're gonna leave, then you're gonna cheer, then we're gonna come out and play one more!"
Everyone was grooving; Pat was wailing like usual, Brian was lovin it, smiling and rockin out, Scott was also rockin it hardcore, and Rivers was bustin out some crazy rockstar guitar poses(like the get on :::your knees and wail out tunes-style). It was great, no weezer fan could ask for more. a memory I will never forget," --jon
the band get really getting into it those songs. It seems like they're
really enjoying playing these metal-ish songs and I enjoyed hearing them.
The most kick ass part of the show was seeing Pat. He was ALL OVER his kit!
I've never seen him like that, the drum parts for the new songs kick ass and
he was all over them. Scott is really good, I don't know if its him writing
his own parts but if it is, wow. Even if its not him he did a great job
tonight. I still think Rivers was the most stoked one to play the new songs.
He kept rhythm w/ his body and looked very relaxed out there. He must love
playing the hometown..." --Josh