...Well, its official: the next single off the Green Album is "Photograph"! On this coming Tuesday, October 30 the single is officialy being submitted to radio stations across the country, and as usual, its your requests that will make or break this thing! Now, in several cities such as Philadelphia, Seattle, Champaign IL and Los Angeles, they are way ahead of us and "Photograph" is doing everything from getting in the top 20 to winning "cage matches" 11 nights in a row! So if you want to hear more weez on your local radio station, its time to start telling the DJ's that "its in the Photograph!"

(Note: so far, I have heard no word regarding such things as a video or retail single releases for "Photograph", so when we know, you'll know.)

...in the "studly studmuffin" category, it seems Weezer has been nominated in Playboy Magazine's "Playboy Music Poll 2001" for best Rock Group. Additionally, the Green Album is also nominated for best rock album. They used a photo of Rivers on the ballot for this thing, (calm down, its just a regular portrait!). (Not that we ever look at such magazines!)

...Weezer is at #2 on the College Television Network top 10 countdown. To keep it flying high, fans can vote at
the CTN website.

...as for the band, the guys are really working hard on some major behind the scenes legal brouhahas these days, so wish them luck. They are dealing with attacks/disputes on numerous fronts, and its really hitting the fan now, after slowly simmering all summer. I noticed that even Courtney Love has put in a word of support for the Weez in a recent statement she issued regarding her own battles. These heavy duty meetings and proceedings have everyone on edge and they are struggling to concentrate on the music these days. As some rapper said, "stakes is high". Suffice it to say the band stands to lose much of the progress that they've worked so hard for all this year, even while plans and preparations go ahead with new recordings and the Extended Midget tour right around the corner.

...Oh yeah! I finally finished up my new "Cobo Challenge" weezer video clip! This was created from pre-show footage me and Pat Wilson shot on the day of the Detroit Midget Tour stop back in September, at the Cobo Arena. Both an Mpeg download and a streaming version will go up on the Audio Video page pretty soon, but for now, heres the link to the streaming (RealPlayer) version- enjoy! click here! 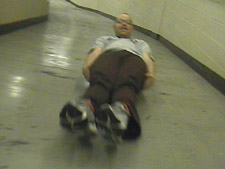