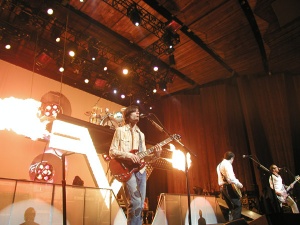 Weezer performing in Cleveland.
On July 15, 2002 Weezer performed in Cleveland, OH at the Blossom Music Center on the Enlightenment Tour in support of Maladroit. The opening acts on the main stage were Sparta and Dashboard Confessional. Loudermilk, Home Town Hero and AM Radio performed on the side stage.


"Weezer World Cup" Foosball Challenge #2: Cleveland- WXTM
Foosball Challenge #2! Today before the show there was another fan vs. weez foosball challenge. In many cities on the Enlightenment Tour, the local radio station will be choosing winning fans who get to come backstage before the show and challenge the band to a mini-foosball tournament! [your local radio station should be talking about the contest, if theyre not, then its not likely to be happening in your area]. There are usually 6 winners per show, and they divide up into 3 teams who face off vs weezer for one game each.

Well, the challengers had another rough day, with The Weezer Squeezers getting in some handsome volleys at times. But again, all had fun and were stoked to meet the guys. Then we all moved back into concert mode, at a place that was designed to house the Cleveland Symphony Orchestra. The dynamite acousticly designed architecture was challenged by the crushing decibels of the weez sound system, and a bit of temporary tech issues made it a little hard to hear clearly in the very front for the first few songs, but it all got sorted out and the rock reigned supreme as it should! Some fans reported the best setlist ever, others still wanted a bit more aggro in the song mix. Most people seemed to agree to disagree and went away smiling. 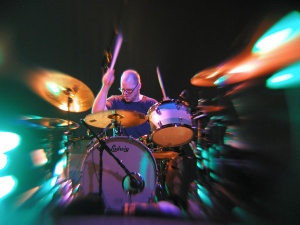 ...Where do I start? My favorite band playing an amazing setlist in an outdoor ampitheater on a perfect summer night - AMAZING. To open up with arguably my favorite song, Say it Ain't So, was definitely a treat. I'm gonna keep this short, but the night was pure adrenaline, the whole crowd belting out every word to every song. Never have I seen an audience so focused on the music being played. 6 Pinkerton songs! What a way to please a die-hard crowd. With no regrets, weezer has now spoiled me for all other concerts (except future =w= concerts). ---Brian

...Me and my good friend had most excellent seats too see weezer and the show was great. The best concert I have ever been too. The pyro was excellent. It was funny, because i didnt see the big =w= anywhere and i was all bummed out. Then out of nowhere Pat is lifted into there air and the flying =w= was right beneath him. Weezer gave it there all tonight and so did the crowd. There were lots and lots of people.I didn't know there were so many fans in Ohio. I had brought a camera with me and I was taking snapshots of the band. The securtiy guys were getting angry because they didnt know who was taking the pictures. Unfortunatly, alot of fans got there cameras taken away, but never fear, i saw Karl taking his camera out, so no one missed anything. Speaking of Karl, It seemed I was the only one who knew who he was. I got to go up and shake his hand!! When i went back up to the lawn area, all my friends shook my hand to get Karl's essence from me. That would've been a great pic, but I was happy with the shots i got. I even got to pose with the lead singer of AM Radio. It was a most excellent night and i hope weezer comes again soon. Thanks guys. ---Rick Del Vecchio