...the break continues. I've spoken to Pat up in Portland, who is busy in his home studio, and pleased to be home for a bit. Rivers continues his mini-vacation, and should be returning to L.A. soon. I'm not sure what Mikey and Brian are up to. Personally, today I attended a nice birthday party for 2 of my grandparents, one of whom turned 93 and the other 95! Not very rock n roll, but fun nonetheless. 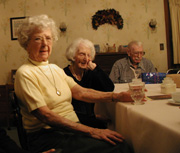 ...I did a bunch of shuffling around with the pages of your radio reports and tour stories and such, and made it all a little easier to navigate. If you bookmarked any of the fans news or the tour stories pages, you should start fresh by clicking here and going from there. As more stuff comes in, ill just keep adding more pages, whether its radio reports, a TV sighting, your tour stories, or whatever!

...As first reported on the main news page, we have some confirmed tourdates. Below is the listing as of today. Obviously there is a lot that remains to be filled in, both in the US and abroad. I'm sorry I don't yet have the "for-sure" info on the Warped Tour. I realize some websites have posted it already, but I have been told that the exact dates weezer is on are still up in the air....

(in here: as yet unknown USA stuff, most likely)

(after July 4, all is unconfirmed at this point...)