...look for the "Dope Nose" video on Mtv! It premiered tonight, Thursday the 25th! Dope nose is now up to number 10 on the Billboard modern rock chart!

...Scott speaks out!
There's a new weezer cover story in Kerrang! magazine (Apr 27), in which
some tricky insinuations were laid down that colored bassist Scott's words.
While journalistic liscence demands that some liberties be taken with events
to tell the story, in this case the reality was pretty far from the vibe
that was portrayed. Scott would like to take this opportunity to clarify
some things...

Kerrang quote #1: "...Nearing the Palau, a call comes through stating that
Cuomo is prepared to "play ball" as long as the offending publicist gets off
the bus immediately and is not seen again. To his credit, rather than make a
song and dance about it, the thoroughly undeserving object of Cuomo’s
distaste decides that the singer’s co-operation is paramount in us getting
the job done and swallows his pride. The bus pulls over and he walks the
hour-and-a-half back to the hotel. "That’s so stupid I couldn’t possibly
comment," says Shriner..."

What Scott was referring to was the story (a "song and dance" in fact) and
the repeated unsolicited telling therof, that the publicist claimed was the
reason for his ejection. The guy saw fit to repeatedly explain this random
old story from last year to everyone on the bus, an event that happened well
before Scott joined the band. (this old story did not appear in the
article). Scott would like to make it clear that he was not in any way
judging Rivers request for the guy to go, and in fact could have cared less
if the guy was there or not.

Kerrang quote #2: "...Afterwards, Shriner, Wilson and Bell unwind in their
dressing room over a modest deli platter. After some talk about the evening’
s performance (the general consensus being the audience were rather subdued
but otherwise it went well) I put Cuomo’s comments regarding the inessential
nature of their presence to the other three members of Weezer. "Good for
him. Good for him," mumbles Shriner, who looks like he could break Cuomo in
half if pushed..."

Scott would like to respond to that bit of journalism by stating that at no
time was he (or any of the 3 guys being interviwed) upset or angry in any
way. It seemes the writer went to great pains to concoct an air of conflict,
when in reality, everyone, except possibly the interviewer, was having a
good time. [karl sez: I was there, I can confirm all of this] Any possible
agression that the interviewer may have sensed coming from Scott was in fact
pointed in the interviewers own journalistic direction, whether he was aware
of it or not. If he somehow hasn't made it clear before, Scott loves being
in this band, is very grateful for the opportunity, and fiercely defends his
bandmates frequently and often. "There is no 'me' in 'team' ".

Wednesday, April 24, 2002
Weezer pleaser for fans
The best rock-pop-punk concert so far this year
HHHH½ out of HHHHH

EDMONTON -- A girl at the Weezer concert warned us this was a "punk rock
show."

It was like no other punk rock show I've ever seen. None of the usual
trappings of the genre were visible, no swearing, no spitting, no NoFx
T-shirts, and but a single mohawk spotted amongst the 3,200 kids who packed
the AgriCom last night. No, this was not your daddy's punk. These unlikely
superstars from Los Angeles delivered a straight-ahead rock show of the
highest order - a glorious display of pop-rock perfection loaded with jangly
goodness and hit after hit after hit. Has "America's Sloan" been taken yet?
Rather an improvement on Sloan, Weezer knows what they're doing when it
comes to the art of writing clever, catchy, smart songs and then blasting
them into rock 'n' roll nirvana, so to speak.

This was the best rock-pop-punk-whatever show of the year so far.

Many in attendance agreed. Sitting behind me were Those Three Guys, the fans
you see at every rock concert - hollering themselves hoarse, the first to
stand, the first to spill their beers. You know the ones. They'd waited
seven years for the Coming of Weezer and it didn't sound like they were
disappointed. Down on the floor, meanwhile, the mosh pit raged as the crowd
sang along to lyrics that make no sense at all until you start to think
about them. Weezer's big hit Hash Pipe goes like this: "You've got your
problem, I've got my ass wide, you've got your big G's, I've got my hash
pipe." The song seems to be on the subject of a gay male prostitute. OK,
Those Three Guys, sing it loud and sing it proud.

Other songs came across like Dr. Seuss rhymes for party animals. Fun for the
whole family! With the words, "We're here to smack your butt, so assume the
position!" - that's a new one - the band opened with Dope Nose, from the
forthcoming album, Maladroit - which was followed by what appeared to be a
thrown pair of men's underwear. Hmm ...

Never seen that at a punk show. But who cares about stinkin' labels?
Weezer's even been called "geek rock" mainly because singer Rivers Cuomo
looks like a nerd. He may in fact be responsible for making big black
horn-rimmed glasses cool again. Thanks a lot, Rivers. Basically, though,
Weezer is so anti-image and anti-punk that they're more "punk" than ever.
Perhaps you need to take the literal meaning of "hash pipe" to understand
that one.

Weezer at least has great taste in opening bands. Pete Yorn's set was
likewise a display of expert popcraft backed by a solid rock band. While his
voice strayed into the Eddie Vedder hollow drone territory, his songs were
excellent and performed with passion. He'll be a headliner in no time.

The evening of mind expansion began with the aptly named AM Radio, whose
happy, shiny brand of rock makes Weezer look like Slipknot. Bonus points for
the sparkly dust and working Like a Virgin into the set. Good band, just too
happy by half.

"...Hey man...I just wanted to tell you about an awesome project me and two of my classmates did for english class. We decided to take a song and rewrite it to tell about the play Julius Caeser by Shakespeare. It just so hit me in class while we were brainstorming weezer songs: My Name Is Jonas could be turned into a wonderful My Name Is Julius! So I rewrote the song to fit the play, and we ended up calling ourselves "Seezer", and we played the song for our english class (and got an A+, no less). But imagine how perfect this was: My Name Is Julius by Seezer...It can't get much more beautiful than that...THANKS WEEZER! Keep up the nice work, Karl. Later..." ---John

"...i'm sitting in english class, talking to a friend of mine about the upcoming CD release. All of a sudden, a girl sitting two seats next to me bursts in and says "I hate Weezer. Weezer sucks!" My friend didn't seem to upset, although she was taken aback. I, on the otherhand, was very angry. "Weezer doesn't suck!" i hurled back. "Yes they do, they have that whole, alternative rock, geek thing. Eeeeewwwwwwww." she replied. "Well, you can just go to hell!" I retorted. Well that set her off apparently, and we got into a huge argument, with many swear words being tossed arround. Frankly, i'm suprised that the substitute didn't hear us, or mabye she didn't want to get involved. Well, i knew that i couldn't win the battle, but i sure as hell was gonna win the war. The next day, i came into class and put a weezer quote on the chalkboard, along with a giant =w=. I also wore my Midget Tour T-shirt, and had i some external speakers for my CD player, i would have blasted some tunes. Anyway, i sat with my back to the girl all period, just so she could see the =w=. Near the end of the period, my friend pointed out my shirt to her. "I saw it." was her only reply. "I wore this just for you." i explained. She said nothing, but she gave me a look that could kill a dog. I knew that she wouldn't mess with me about weezer again!..." ---Chris

"...I had to give a 3 minute speech in English today, and without notes or any preparation, I volunteered to go first. I talked about Weezer, their concert I recently attended, and how awesome the music is and why. I received a standing ovation and a 98 on the project. Oh, I also threw in a quick plug for Maladroit at the end..."---Melissa

"...I just read the post you put up with the kid who wore his Weezer shirt to work and got wrote up. I work at a gas station, and yesterday I decided to wear my Weezer shirt to work. Anyway, we have to wear these ugly red smocks over our clothes, so only the E Z was showing on from the shirt. The funny thing was that I got more comments on my shirt then I ever have before, asking if I liked Weezer and talking about what shows I've been to. I just thought it was cool that they could recognize the shirt even though only part of it was showing..." ---Kate 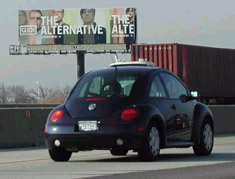 "...Here are the pictures of the Weezer Billboard on I-94 outside of Chicago. I got some strange looks from the morning commuters as I took these this morning but I had my weezer shirt on so hopefully they got the picture...Scott is on the billboard, he is just hiding in the corner. Pretty darn cool..." ---Kat

"...I saw Weezer on TV yesterday. The interview with Scott and Pat was from London on Viva Plus (suckin' German Channel broadcasting from all over the world) and it was so cool! pat and Scott had to roll broccoli in cigarette paper and they were asked things like 'What do the lyrics of Hash pipe mean'??? (the question went out to Scott!!!) And some other boring things they're usually asked. The only cool question I think was: Do Hash Pipe and Dope Nose have anything in common??? (I laughed!) But the coolest thing in that interview was, that Brian came in and Pat shouted: "Hey, look, there's Brian Bell!!" The interviewer said then: "Hey Leute...da is son Typ, der kommt hier rein und geht ploetzlich wieder...ich hab keine Ahnung wer das is!!!" (Translation: "Hey people...there's a guy comin in and goin away, I don't know who it is!!!") And Brian came in that room a few times and that crappy interviewer didn't know who he was!!!..." ---Criss from Sereetz, Germany