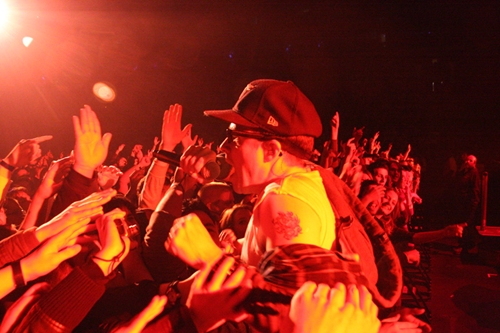 Rivers and the band, when asked "what does Raditude mean?" have said that its the state one gets into when they are in the zone, capable of seemingly superhuman feats - things you could not normally do. Well, all that is well and good to talk about, but the time comes when one must demonstrate the concept. And I can tell you tonight that I've seen supersize leaps. One armed pushups. Beachball crashes. Balcony leaps! Raditude is real, people, and its in these shows! The Toronto show was in the Air Canada Centre, a much larger venue than the last 2 shows which were in really big ballrooms, but still not nearly the size of a hockey arena. So it was unknown how this would affect the show, which had started on an excellent note in Chicago, and got even better for everyone in Milwaukee. There were some adjustments to be made and there are still a few little kinks to be worked out in the show overall, but the scaling up to the arena went just fine and pretty much everyone agreed this was the best and most fun show of the year so far.

A particularly rad moment came when it was time for "(If you're wondering if I want you to), I want you to", which has featured a duet with a radio station contest winner so far. Scott announced the duet, but in fact 102.1 The Edge Toronto didn't actually run the contest, so there was no winner waiting in the wings! The band appealed to the audience - who here really knew the song and could really sing it? Usually everyone raises their hands and insists they know how to play or sing something, and when they get to the stage... it turns out they really just wanted to get on the stage with the band! But not this girl! She was from a town most in the audience didn't seem to approve of(??) but she could sing like crazy! It was just an awesome duet, on par with the recent Sara Bareilles ones, and a terrific surprise! Thanks girl!

...Speaking of "(If you're wondering if I want you to), I want you to", there's another new remix for it now by Doctor Rosen Rosen that's getting some rave reviews, and it's available free here.

...Kudos by the way to our tour openers Motion City Soundtrack and Jack's Mannequin, as well as tonight's special additional guest, ill Scarlet, a Canadian band who sounded great! 102.1 The Edge put the show on as the "Jingle Bell Rock", and gave out a cool Raditude pick-card to the first 1000 people who bought tickets.

..."Raditude" has been nominated for a Best Art Vinyl award! Check it out and vote for Sidney! Strike a blow for rad dog based artwork!

...Scott's wife Jillian has written a new book that will be out in the spring, and she has a new website up fo it now: Some Girls: My Life in a Harem. Note that her blog has changed URLs, heres the new link!

* UNKNOWN airdate - Weezer performing a cool song about bugs while in bug costumes, on the Yo Gabba Gabba show! Airtime TBA.

...We're excited to offer you this exclusive t-shirt brought to you by MySpace Music and Shockhound. Supplies are limited, so click the image below to get your shirt now! NOTE this offer now includes a free bonus vinyl 7" featuring "(If you're wondering it I want you to), I want you to" b/w "the exclusive 7" track "I Woke Up In Love This Morning"! 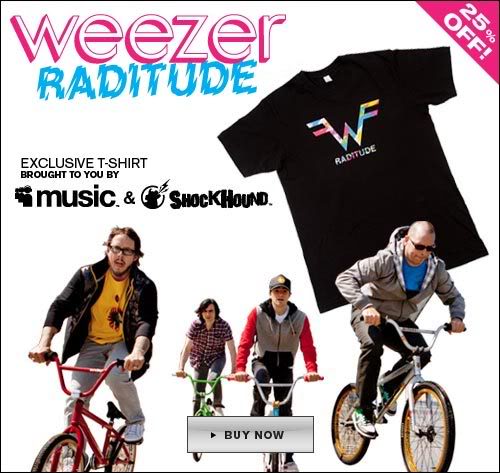