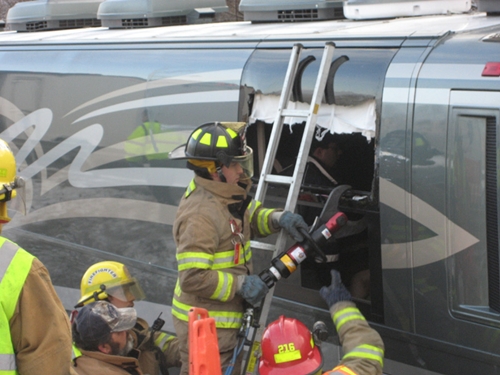 Today at 7:18 AM EST, about 40 miles West of Albany on I-90, the weezer tour bus carrying Rivers and his family and assistants lost control as it hit a patch of black ice. The driver employed every ounce of skill he had in fighting to keep the bus upright, as the vehicle violently fishtailed over the highway. And while the bus did indeed go off the road, plunging about 8-10 vertical feet into a muddy ravine off to the right of the Thruway thus coming to a very abrupt stop, it did not flip or roll, despite having plowed right over a guardrail, flattening it. Kudos to the driver for somehow keeping things as level as they could be - surely this story would have been far more tragic if not for his actions.

Nonetheless the damage was severe, and everyone on the bus was either terrified or injured or both. The bus contained Rivers, his wife and daughter, their nanny, and Rivers' assistant Sarah. Both Sarah and Rivers' wife were pitched out of their upper level bunks onto the floor 5 feet below. Somehow Rivers' wife was uninjured, but Sarah sustained 2 fractured ribs and a fractured lower vertebrae. The baby daughter was in her crib unit and was fine, as was the nanny who was sleeping near the floor in her bunk at the time. However in the back lounge, Rivers was tossed around violently, waking up as he landed back on his mattress. He recalled not hitting anything, but later we learned that he must have, as he cracked 3 ribs and sustained some mostly minor but very painful internal damage, as well as hurting his lower leg somehow.

The interior of the bus was a chaotic mess with broken glass, smashed glasses and plates, food and clothing items strewn everywhere, as well as the refrigerator flying off the wall and many drawers coming right out of their slots, spewing their contents everywhere. On top of it the sliding interior doors were fused shut and the bus's electronics were ruined, so no one could get into the back lounge where Rivers lay immobile and unable to speak due to the pain in his ribcage. To top it off, the front door was jammed shut with 5 feet of heavy wet mud up pressed against it so there was no way to leave the bus.

Finally, using the jaws of life to remove a rear window bar, the local EMTs and firefighters got a ladder across the ravine to the rear bus window, where they could get to Rivers, eventually getting him and Sarah out on stretchers and into an ambulance. Meanwhile they dug frantically in the mud at the front of the bus, clearing the front door so everyone else could come out. To access the rest of the bus from Rivers' lounge, the fused sliding door was destroyed by the firefighters.

The other buses pulled up within 20 minutes of the accident, and already a long line of firetrucks and EMT vehicles were on the scene. I threw on my shoes and walked up just as the jaws of life were being turned on, catching a glimpse of Rivers lying inside on his back surrounded by EMTs. I couldnt believe what was happening in front of me, as Rivers lay so helpless, shivering in the center of the chaos, and meanwhile the sun was coming up and revealing an utterly beautiful light covering of snow on the surrounding trees. I dont know how to describe the wave of awfulness that gripped me as I watched, but adrenalin took over and the next thing I knew I was in the passenger seat of an ambulance transporting Rivers and Sarah to the hospital in Amsterdam, NY, about 10 miles from there. That adrenalin would sustain me all day, as everyone's did, from family to band to crew - everyone pitched in to help however they could all day as things unfolded.

Fast forward to now - Sarah was discharged, a 3-4 week period of extreme pain awaiting her as she heals from her injuries the only way possible, with time and gritted teeth. Rivers was transported to a larger area hospital where he remains under observation. He is resting about as comfortably as could be expected now, and we were relieved to hear that surgery is unlikely. Hopefully tomorrow the docs will have more info. You don't fool around with internal injury. Whatever happens, we forsee some gritted teeth in his future too.

We are sorry to say that the rest of the December Raditude Tour has been cancelled - when we can reschedule the dates we will, of course. I have no ticket or refund or whatever info at this time, but stay tuned to this site and the ticketing websites for more info. For now its a waiting game for all of us. Thanks for your kind thoughts and good wishes, we need them!