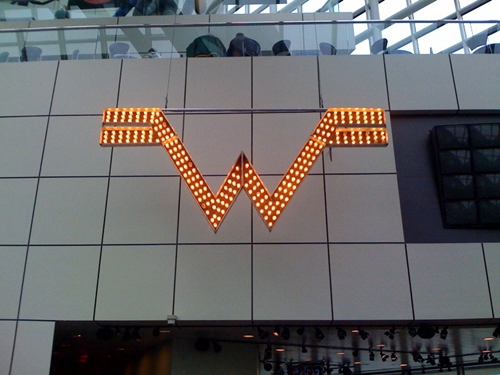 Its been a full day and a half since the terrifying bus accident that hurt Rivers and his assistant Sarah, and everyone in the weezer camp is very grateful for the outpouring of concern and support that has happened since the news broke. Thank you for all your kind thoughts!

The update: Sarah went home today with the rest of the band keeping an eye on her on the flight, starting what will surely be a frustrating and painful 3-4 weeks of recovery. We all wish her the speediest of healing. She's a very tough girl, we know she can do it. Meanwhile in the hospital, Rivers has had a much better day than yesterday. He went from being barely able to talk and open his eyes yesterday to partially sitting up, talking clearly, reading books and checking the internet, plus his color and energy seemed much brighter. And then finally in the evening he was given some good news.

To back up a bit, Rivers' internal injuries included both a small cut on his spleen and a small puncture in his lung. An internal cut needs to be carefully monitored to see if it is healing up or not. The lung puncture was small so the lung did not fully collapse, and thus no surgery was needed for that, but it also has to be monitored carefully to avoid fluid build up. Today the doctor announced that Rivers blood pressure had stabilized, meaning the spleen was no longer leaking - it was on the mend. And his lung seemed to be gaining strength and holding up, meaning it too looks like it will mend itself with time. All this is great news so far. Plus he was given the go ahead to eat some real food again - a very positive sign!

Tomorrow the doctor says it will be time to see if Rivers can stand up again. If that goes well and his vital signs remain stable and improving, he will get to go home pretty soon! Wish him well - your positive energy and thoughts are working so far!

Now we come to the mystery of Rivers' right leg. He was totally unable to move it after the accident, but doctors were mystified as there were no broken bones and no signs of impact on it. Today after a day of icing and compression, he was able to wiggle his toes again. And he remembered a small detail - he recalled that that same foot was sort of hurting late the night before as he went to bed in the bus - after the Toronto show. That got me thinking...

During the Toronto show, Rivers pulled an act of Raditude that may have been the real culprit - after the Kids/Pokerface performance, during which he appeared up in the ACC's bleachers in a blonde wig, he was supposed to return to the stage via a particular set of stairs to the floor level. But during the song, lots of fans ran over to the closed seating area and danced around Rivers as he sang. Once the song was over, security had a hard time getting the people to return to their seats, and Rivers made his way down to the edge of the seats on an unplanned route, trying to get back to the stage as quickly as possible. When he got to the end, there were no stairs, and with the lights low for song changeover, he couldn't tell he was about 6 feet off the floor level. I was directly below him and reached up hoping he'd grab my hand but in the darkness he couldn't see me, and he launched over the railing onto the floor 6 feet below. He landed good and finished the show with no apparent injury, but I strongly suspect that his Raditude took him through the show, only to reveal that he had sprained his ankle later on.

Another mystery has been solved as well, which was how did Rivers get his injuries when he apparently didn't hit anything? He recalled not bouncing off of anything, but there was one detail he didn't realize - that the bus dropped 8-10 feet into the ditch. He said it felt like he never left his mattress - but the mattress was not tied down, and clearly was not where it should have been when the EMTs found him - it must have taken flight when the bus suddenly dropped, with Rivers riding it face down! Rivers injuries to his back and side mean he must have struck the bus's ceiling, possibly hitting a light fixture or other irregular shape. In the pitch darkness of his back lounge during sleep time, he would not have seen that he was actually airborne for a second - the mattress and Rivers remaining level as the bus around him dropped away - and must not have felt whatever struck him in his side and back due to the shock of the situation.

There is another part of the story that we pieced together later on as well. Rivers' bus was being followed about a quarter mile back by the Jack's Mannequin bus. Their bus driver witnessed the accident, and immediately called who he thought was Rivers' bus driver. But right before this tour started, the man who was supposed to be Rivers bus driver had to excuse himself to go to the hospital and was thus replaced by Johnny Cox, the driver who did his best to keep the bus upright during the crash. Jack's Mannequin's driver hadn't learned that yet. So the original driver, resting at home after his own hospital stay, got this early morning call asking if he was ok, but at first had no idea it was in reference to the crash! The drivers quickly sorted out the confusion and soon everybody was getting the needed calls to return to the scene of the crash, including the highway patrol and 911. Kudos to all the tour drivers, whether they were actually driving or not! Their brotherhood and devotion to safety has solved many a problem and turned a lot of bad road situations around.

...todays photo, from the rock and roll hall of fame of weezer's retired "W #2" from the 90's (there are 3 light up W's total including the one in use today), was sent in by Timothy Edwards. Thanks!