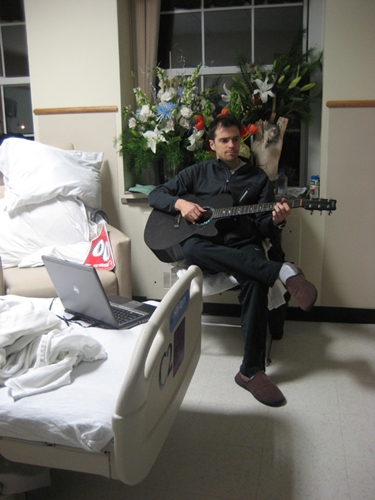 ...The time has come for freedom! After walking with and without a cane and getting some good hematocrit blood test results on Thursday, Rivers was given the go ahead to be released from the hospital! He elected to take an additional night to rest there, while we prepared a bus for the cross country trip to L.A., to begin today, Friday. "Wait a second," you say - "a bus? Why of all things would he get on a bus now?" Well, one of the strict doctors orders is that Rivers cannot get on an airplane for a month, as the air pressure changes would be bad for his healing punctured lung. So theres only one other quick way to get him home to L.A., and thats a tour bus. I'll be riding with him, making sure hes ok, and we'll have 2 drivers trading off driving and sleeping, so we dont have to stop! Were taking a warmer southerly route to avoid bad weather, and rivers will be using a cozy lower bunk for sleeping - none of that back lounge bedroom stuff for him! It will be cool - weve got seasons 1 and 2 of "Mad Men" to watch, some books to read, a freezer full of organic entrees, and the bus is wired for internet, so work can continue uninterrupted. The only thing were missing is Burt Reynolds in a 1978 Pontiac Trans-Am to run point for us!

Today's picture shows Rivers strumming and humming in his hospital room, on a cool carbon fiber acoustic guitar lent to him by his doctor, Dr. Rosati. Deep gratitude to Dr. Rosati and the wonderful nurses and staff of Building C of the Albany Medical Center for taking such good care of Rivers and making his stay there a healing and relaxing one.

...Check out this new video from the 12/5 Chicago show, courtesy of the Chigaco Blackhawks! Keep an eye on their website, they will soon be auctioning off the Blackhawks jerseys that the band wore and autographed that night!