"Buddy Holly" is the second single and fourth track from The Blue Album.

"Buddy Holly" is one the most-well known Weezer songs. Originally written in June of 1993, the demo for the song, released on Alone: The Home Recordings of Rivers Cuomo, features a slower tempo. In the liner notes for Alone, Cuomo explained how he was inspired to write the song after a friend from his choir lent him a Korg keyboard:

"Buddy Holly" is the most oft-performed song in the Weezer catalog. Beginning in late 2000, an extended guitar intro was added, and continued to be performed through 2005. Rivers Cuomo has said that "Buddy Holly" is his favorite song to perform live.

"Buddy Holly" was the second single released from The Blue Album. Its initial cover art featured a photo of a very young Rivers Cuomo with a female friend. Apparently, the photo was used before gaining permission from this girl, and a search for her turned up fruitless. When Geffen realized they may be in an actionable position, they quickly changed the cover, and a photo of Cuomo and his brother Leaves was used instead. The incorrect cover only appears on promo copies of the single, except in Austrailia, who rushed a "Buddy Holly" single out so fast that it not only included the banned photo, but included none of the exclusive B-sides, instead simply including the LP version of "Holiday". Karl Koch would later say, "These Austrailians seem to rush into everything."

The retail single utilized live recordings from a November 1994 show in Rochester, New York as B-sides, along with the DGC Rarities version of "Jamie".

"Buddy Holly" is one of the most universally-loved and famous Weezer songs. The guitar fill at the end of the solo is one of the most notable moments in any Weezer song. Its music video was very significant in Weezer's career, winning awards and bringing the band a high level of visibility. The song was ranked as part of "The Very Best" by the Weezer songblog, Teenage Victory Songs. Allmusic.com gave "Buddy Holly" a 5 star rating and named it an "AMG Track Pick."

The song was covered by parody group Richard Cheese and Lounge Against the Machine for their 2003 album Tuxicity.

The one that blew everything out of the water for Weezer, and, along with his "Sabotage" video, put Spike firmly on the map. No computer trickery, just a real Al, real sets and real props, combined with vintage footage to freak out a lot of fans not yet familiar with what CGI could and couldn't do.

-Karl Koch on the "Buddy Holly" music video, from the liner notes for Video Capture Device

The music video, featuring the band spliced into a Happy Days set, was directed by Spike Jonze. The video combines new footage of the band, and old footage from the show, including many of its stars, such as Henry Winkler and Ron Howard. Also included, in a newly-shot speaking role, is Al Molinaro, who played Al Delvecchio on Happy Days. It was massively successful, and launched the band into mainstream fame. It was featured on the installation CD-ROM for Microsoft Windows 95 as well. In the commentary for the video on the Video Capture Device, the band members reveal that many of the backup dancers used in the video are friends of theirs, including Tony Maxwell of that dog..

In a Riverpedia post from September 2020, Cuomo recounts a story watching Nirvana's video for "In Bloom" and admiring it. The video bears a number of similarities to Jonze's "Buddy Holly," including a TV personality introducing the band before the song, footage of the bands performing inter-spliced with footage of an audience that isn't actually there watching, and the band members giving a tongue-in-cheek 1950's style performance of the song. 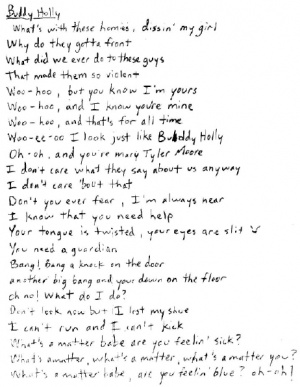 What's with these homies dissin' my girl?
Why do they gotta front?
What did we ever do to these guys
That made them so violent?

Woo-ee-oo I look just like Buddy Holly
Oh-oh, and you're Mary Tyler Moore
I don't care what they say about us anyway
I don't care 'bout that

Don't you ever fear, I'm always near
I know that you need help
Your tongue is twisted, your eyes are slit
You need a guardian