...recording day 37 (mixing day 5)...today was Tom the mixer's day off, so no songs were finished off. However, lots of work was done polishing up both "Island In The Sun" and "If You Want It", and they are ready to mix. Also, some key last minute decisions were made on "O Girlfriend", and a few changes were made. Since that song was already mixed, it has to go into what is called "recall mode", where all the settings on the mixing board for that particular song are reloaded into the machine and reset to mix the tracks again with the new changes. This sounds scary, but is actually fairly common in mixing albums and shouldn't cause any big delay.

...Before the work got underway we had our sunday afternoon golf challenge, which we envisioned to be a high-stakes competition, but turned out to be a competition of who could lose the least golf balls in the water hazards! We worked hard on getting our games improved, and some progress was made amongst the fairway carnage. "Caddyshack" quotes were running rampant..."be the ball, Noonan.."

...Today we got more than a handful of fans zeroing in on the studio, coming out of the woodwork to say hello. (see photo) As far as I could tell, none of these fans were actually from Miami, strengthening our confusions about the state of the rock around here! 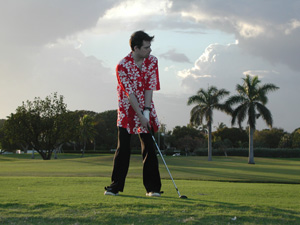 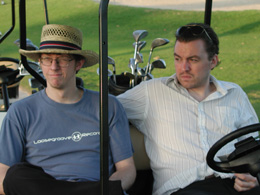