...today's show was very well documented. Besides the video and photos I was shooting, Yahoo filmed the show for their webcast (did anyone see it?), a photographer was on hand to shoot pictures for the new album's inside artwork, and the album's art director was on hand shooting video to pull still images from later, for what purpose I dont even remember exactly. So anyway there were a million people with cameras all over the place, which just seemed to add to the "big rock" experience...

...early on, during the Get Up Kids' set, the barricade somehow came loose and shifted forward. Heres a first hand account from fan Adam T.:


"...after Ozma had left the stage there was a huge crowd surge which left a LOT of us pinned up against the barrier (theres always has to be a few thousand that want to jock for front row position). It took all I had to hold my body back from being pinned up against the barrier. Ive been to many concerts, and ive been held up in some pretty crazy, rough crowds before but this one takes the cake. It got to the point to where i couldn't enjoy the show simply because I was seriously fearing for my safety. It really hit home when the pressure from the crowd against the barrier forced the chains holding it down to break and the barrier to be pushed 6 feet foward almost touching the stage, and forcing the security behind the barrier to jump up on the stage to avoid being pinned against the stage. After the Get Up Kids were done I figured it would get nothing but worse when weezer took the stage...."


...fortunately, in between bands, the security dudes were able to get the crowd to step back, so they could install some makeshift braces to keep the barricade in place. After what only ended up being a few extra minutes, Weezer got to take the stage and provide the healthy doseage of rock. And once again, the crowd was awesome too! 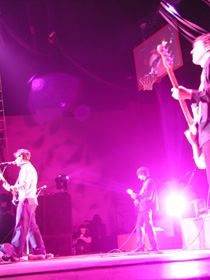 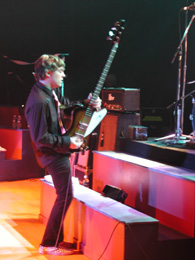 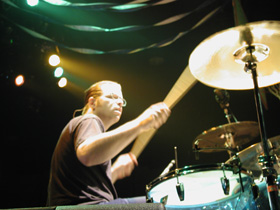 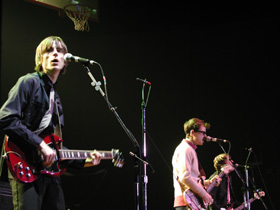 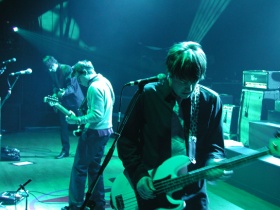