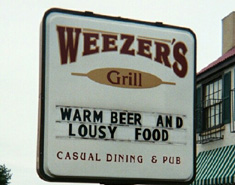 "...I just got back to Kalamazoo from Battle Creek( or Battle Crick if yer a local) after enjoying a "Weezer Burger" from Weezer's bar and grille. The Weezburger comes with sauteed onions, mushrooms, bacon, swiss, cheddar, mozarella and green olives topped with lettuce, tomato ketchup and mustard served with fries and a pickle. A fine burger. There was also a section on the menu called "Weezer's Favorites". I don't know if I would recommend the open face prime rib sandwich, my friend Aaron Wright of the Kalamazoo rock act Slow Drag, "sauced" his pants a tad bit mid-sandwich. This could have been from the evening of brown bottle mayhem the night before or maybe dining at Weezers was just a little too exiting for the poor sap. They changed the sign it now say's "Flash the clown Tues. nights"?? Tried to steal a menu but they were hip to my scheme, better luck next time." -Atom

...well the spark that is the new "Keep Fishin'" continues to ignite! I've gotten numerous reports from LA area fans that they have heard it on 106.7 KROQ-FM on many occasions in the last 3 days, some folks hearing it twice in a one hour span. The DJ's have had "nothing but good things to say" about the song, with DJ Jed the Fish thanking Rivers for "naming a track for him." (heh.) Some reports from other stations have come in from around the country too. Not sure if all of these stations are playing the new or original version of the song...

...meanwhile "Dope Nose" still is getting respectable play in lots of cities, and countries, with heavy play reported on Triple J Australia, a #21 slot on Much Music's video countdown, #8 on 104.9 XFM vancouver, and plenty of appearences in Stanley Cup playoff games! Also it was heard used on a recent episode of "The Regis and Kelly Show"!

...in the "out of left field and very cool" dep't, The Toronto Sun named "Private Message" [album 5 demo currently available in mp3 form in the a-v page] one of the "10 coolest tunes of the week": "Barely two weeks since Maladroit hit the stores, the band that (more than any other) has figured out how to use the Web, is already posting demos for its next album. This one's so obscenely catchy, you'll be singing along halfway through the second chorus."

...fan thing #1: a group of fans is trying to make a homemade fans' weezer Tribute album (covers compilation). Their plans are still getting organized at this time, more info is available on this website.

...fan thing #2: a fan has set up a new website to host a weezer fans' chat room, which is handy as the official one we've been trying to make happen here on weezer.com still isn't ready yet (we're told). The idea here is to organize the weezer fan community and keep people in touch regarding street teams, "concert teams", and such. Check it out here.

...fan thing #3 over on fan site weezerhq.com, they just launched an interactive section for fans that should provide some pretty cool tools for fans to get in touch with each other and trade info.