...today was day 1 of the 2 day "Keep Fishin'" video shoot, at a secret location in the LA area. According to our scoopmiester SB, "...it looks amazing and from what we could see on the monitors it is going to be a killer video. Today was basically shooting the performance parts with the band and a few "guests", tomorrow will be the storyline shots. I guess you could say that Pat has a starring role which means he has the longest day tomorrow. As you can see from the pics Rivers is beardy no more and there was a hilarious moment when he came out from the bathroom with a comedy moustache mid shave, all nonchalant. He had everyone on the floor, especially Scott who seems to have an admiration for Rivers's facial hair. It wasn't too long of a day and there were plenty of entertaining things to see so the time really flew by. Tomorrow should be a blast as more "characters" will be involved. Good times!" 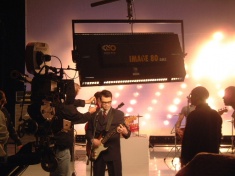 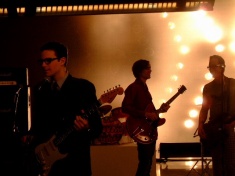 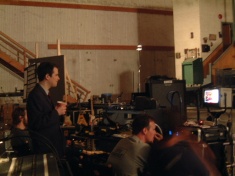 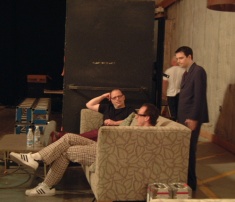 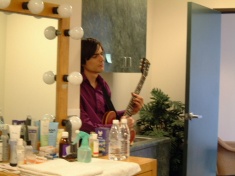 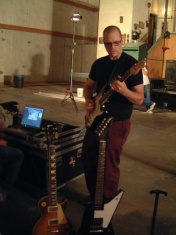 ...meanwhile in the secret lab, the dvd work continues. So much footage to scan through...my eyes are starting to see double! 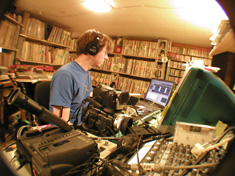 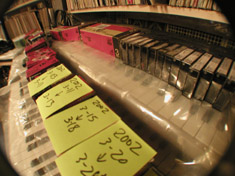 after a series of reports from our intrepid weezer sports reporter in Japan and Korea, a follow-up as Rivers returns to L.A. with team USA still in the running...

(Sat. 6/15) On Saturday, Rivers returned home to L.A. Cell phones were activated immediately as the plane landed, and it was back to work (not that anyone ever stopped working, of course!)

The next day (6/16) was the pivotal "Round of 16" game between the US and Mexico. The winner of this game would advance to the quarterfinals. The teams are obviously very familiar with each other, so they really knew how to push each others’ buttons. Rivers went to a Hollywood bar to watch the game with some fellow soccer fans (Hollywood bars pale in comparison to Seoul's "O'Kim's"!).

The rivalry was pretty heated at times, but the U.S. men kept their cool, and came out with a 2-nil victory over Mexico, advancing to the quarterfinals of the World Cup for the first time since 1930! Rivers, a longtime USA supporter (even back in the bad days), was needless to say pretty stoked! A bummer for the talented Mexican team, but... someone's got to lose...

In other news, Underdogs Korea just beat the highly rated Italy 2 - 1, advancing them to the quarterfinals as well! They scored their first goal in the 88th minute, and then followed up with another goal in the second half of overtime to win the game! Korea was not expected to defeat Italy, but there it was. Jung Hwan Ahn was knocking boots. 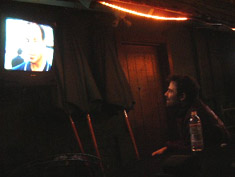 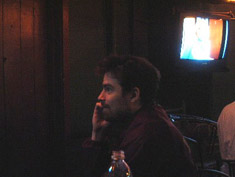 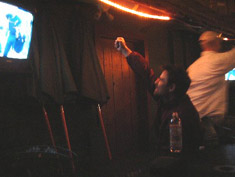 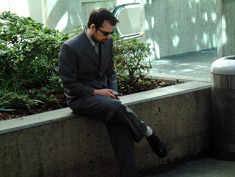 ...More Maladroit Activity: around the world, video, and "other songs"...<br< Besides the fresh new activity surrounding "Keep Fishin'", (reported yesterday), plenty of other weezer stuff is going on on televisions and radios across the globe...

97.9 wgrd Grand Rapids MI is the new version of keep fishin'. 94.7 KNRK in Portland, Oregon did not play the album version, but in fact, played the radio edit...and it won the cockfight again tonight! ...The album version) has been playing on 94.3 Supercool, an independent radio station in Orange County, CA.

"...I was driving to the beach the other day and was listening to the new weez. I decided since I had not taken the cd out of my player since I got it,(may 14, Tower Records in LA after the Whisky show) it was about time to put in something else. I was in the middle of Dope Nose and I hit the eject button. I pulled the cd out but the song kept playing. For a second I couldn't figure out what was going on. Then I realized it was the radio station 91x in San Diego. The song continued playing right were the cd left off. I was in shock! I realized it was a sign from god that I should keep listening to the new album. That was about a week ago and I'm still listening to it in fear of what will happen if I stop :)..." -jared

#10 On the MTV2 rock countdown...and over in Brazil, Maladroit's release was mentioned on a "TRL" style video show, and the Dope Nose video premieres on MTV Brazil on the 19th of June, on the show "Wah-Wah". That's very good news, because this show airs at 4pm, and the other weezer videos only played on the alternative music show "B-side", which airs late at night.

101.1 The Edge in Ottawa, Ontario: playing some Burnt Jamb...on 92.1 in Madison WI, Burndt Jamb was played on their "deep cut" program...Burndt Jamb heard at a Boston Red Sox game during a commercial break...Australia's Triple J is playing Burndt Jamb frequently...Also In Australia, Weezer's album is album of the week as of next week (24th of July) at Radio Adelaide 101.5 in Australia, with 'Burndt Jamb' to be played as the lead track off the album....on Philadelphia's Y100, on their YNOT show, "Take Control" was played. After the song, the DJ plugged the mini-movies on the CD, He said something like "the Cobo Challenge was great. The drummer was literally a human luge and he was twisting and turning down the stadium's hallways." WHRW Binghamton University radio has been playing Take Control, responding to listener requests...KOOX top 10 "louder rock" adds for 6/11 included "Maladroit" the album at #3...Meanwhile, in Indonesia:

"...I heard 'Slave' on 101.6 MTV On Sky FM. I don't know if it's on their countdown or they just happened to play it. But I do know that when radio stations here give airplay to album tracks that aren't necessarily the next single, it's usually what they consider the most 'accessible' track. I recall way back in '95, 'Say It Ain't So' was on Prambors FM's chart before it became the next single off the 'Blue Album'...In Pinkerton-related news, on the MTV Asia video request show 'MTV Most Wanted' (a show I usually avoid like the plague because practically all of the requests are for your standard bubblegum pop fare), some good samaritan requested 'El Scorcho'. Nice one, dude...it was a poignant trip down memory lane..."

NEW: This picture was not part of the original post. It was provided exclusively for Weezerpedia by Karl Koch. 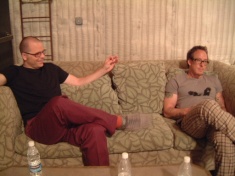 [click on the photo for a larger size version]