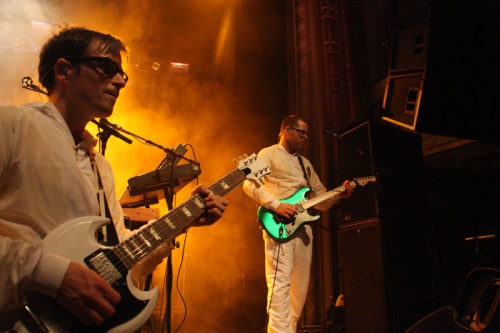 Check out Weezer's NEW VIDEO for "(If you're wondering if I want you to), I want you to", exclusively on Babelgum.com! Note that Babelgum's weezer page has a ton of related features too, like interviews with Rivers and director Marc Webb, behind the scenes at the video shoot, and more! Be sure to click on the "Teaser" clips, which have now been expanded to include yours truly's action packed 'webisode style' version of the video!

...be sure to check out music.aol.com FRIDAY 10/23 for a special announcement! Weezer - the band who hunkers down and then comes out to blitz you with new stuff!

...San Francisco: The Regency Ballroom - Myspace put on quite an event this night, organizing things to fall in place just right for the fans and band. The Regency Ballroom is a great venue, that perfect mid-size for sweaty rock madness. Being a free show, the line to get in formed real early, at about 6 AM according to those first in line. Apparently the tenderloin district isnt too fun to camp out in overnight, so i dont blame the peeps for playing it safe. Meanwhile, weezer had some business to take care of down in LA that day, and multi-tasker Josh Freese was just getting off of another gig that afternoon, so the only realistic solution for getting up to the show in time to make a soundcheck was chartering a G-4 private jet. Yes, weezer is all about practicality, but with pizazz! In any event, it was real sweet snacking on cheese and crackers at 650 mph, making it from LA to SF in 45 minutes! And then the rock began. Openers Natalie Portman's Shaved Head rocked strong, setting the stage (literally) for the Weez attack. 3 Raditude songs in the set tonight along with the usual mix of old and recent and some cover action. The energy was big tonight, things got smashed, splintered and squashed!

Tour dates for Weezer; more to be announced: