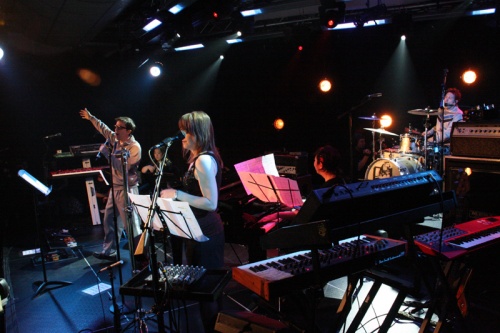 * Reminder: Go to AskWeezer.com and send Weezer your questions for the unique Twitter Interview to be conducted on 11/10!!!

...Well the NYC craziness continues! Today Rivers went down to Billboard Magazine to do a photo shoot with Jermaine Dupri, for the cover of Billboard, which will be out 11/13. Victory! Then the whole gang reconviened at the PC Richard and Son theatre on Avenue Of The Americas near Canal St., for the Stripped / iheartradio secret show, which went down exclusively to a small audience of contest winners. After some interiviews and photoshoots with iheartradio, I had the pleasure of introducing the guys onstage. Todays set started acousticly like yesterday, with classical accompniment on a special cover of Coldplay's "Vida La Vida". Then the classical players were thanked and in came the rest of the band for the electrical portion of the short but very energetic and fun set.

...Heres two articles on what Rivers was up to on Sunday before he flew to New York: Band Hero commercial shoot, in the style of Risky Business!

(click on any image for a full size version)