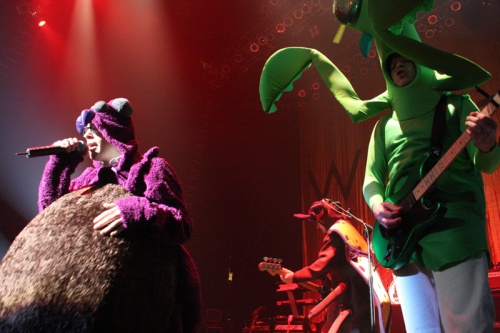 Tonight was the climax of the New York Super Weez Week. Not the final performance but the big one, down at the Hammerstien Ballroom, where Weezer played once before back in 1994, opening for Lush. The Hammerstien is a great if somewhat rough old ballroom, a perfect mid size venue to rock out in and give everybody a good sight line and decent sound. Sort of like the Palladium in L.A. but with less acoustical dead spots.

Being a Halloween show, costumes were encouraged, and many were spotted in the audience. Though many came as a "Weezer Fan", which is fine too! Onstage, the band got into the spirit of things, starting the show in their wicked bug costumes from the "Yo Gabba Gabba" show taping from a few weeks back. Then they had about 20 fans come on stage and help them get their costumes off, WHILE they played "Undone"!

Tonight we had some special guests onstage. No guest rapper for Cant Stop Partying, but Leighton Meester did the duet thing with Rivers on "I Want You To", while Nat Wolff from The Naked Brothers Band helped out on guitar for that song. Odd side note: check out the recently released DVD of "Inside" at Blockbuster, its a pre Gossip Girl Leighton role, directed by a certain Jeff, once better known for his weezer fandom on the old RCB boards!

Shoutouts to WeezerChild Hayley, and Doug and Andrew from WSIN 1590am, Southern Connecticut State University Radio, as well as Alex Greenwald from Phantom Planet (on hand to rehearse for his role in tomorrows Alexa Chung performance), and Chris Shaw, engineer on the Blue Album at Electric Lady studios, way back in '93. And a special shout out to Jason Neely, who shot the photo of his dog Sidney which graces the cover of "Raditude" now! He was given exclusive access to shoot the band during their soundcheck today. It was great to see everybody, costumes or no!