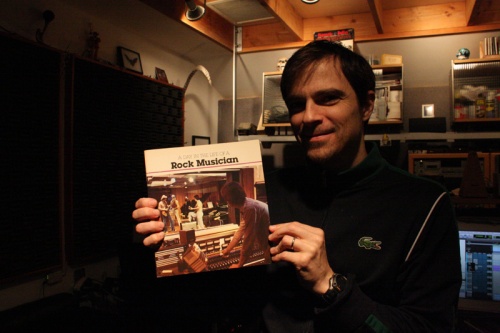 People, I been driving for days, on a cross counrty trek. Just found the internet after a long search! Some things to know:

...Rivers has been in the studio last week and continuing into this week, working on getting previously unreleased material chosen and ready for the world for the upcoming releases of "Pinkerton: The Deluxe Edition", and "Odds And Ends", a collection of perfectly good Weezer recordings that somehow never made it out before. Both of these releases are currently expected fairly early in the new year. This current studio work is the 'review, compare and tweak where needed' phase. Next comes mixing (where needs be) and sequencing, mastering, then finishing the artwork up. Both of these releases are going to be super cool!

...the whole of the Weezer Twitterview is collected on askweezer.com, so you dont have to fish back thru the old Weez Twitter posts to find everything. Thanks for participating!

...MTV visited Sidney the Raditude cover star and got a great, er, "interview" with him. That dog has got some energy! Check it out here.

...Video interview with Rivers on YoungHollywood.com.

...Be sure to watch the Carson Daly show on November 26, for live footage and backstage nterviews with Weezer and co, filmed on 10/24 at the Hollywood Palladium.